I believe that no man is an island, that we are all connected, and so I won't say that could have been me. That was me. ("Suicide bombers target Kabul hotels killing seventeen"). The Indian waiters who put out the buffet, and joked when I forgot to pay 50 cents for the can of Sprite because I thought they were free, and didn't make me feel bad about it. The guard at the gate I slipped 10 bucks to when his boss wasn't looking, because I knew this was an amount here which could change someone's life. (We interviewed an elderly gentleman on the street outside who through the 20 dollar gift of a kind stranger was able to stop begging and start a banana stand. Twenty dollars, and now he didn't have to beg anymore.)

There is a fairly good chance that a good number of the attackers had taken an amount of money to participate because they were tired of watching their families starve.

There are more than you might think in this war. There may have been some hard-core jihadists from the Arab, Al Qaeda side, but for the most part, as former commander of US forces in Afghanistan, General Karl Eikenberry (now ambassador, who opposed the surge,) told Congress: "Much of the enemy force is drawn from the ranks of unemployed men looking for wages to support their families" Unemployment is 40 percent, and starvation is of the literal, ribcage showing kind.

It's not that it could have been me. It was me, the way I see it. This war is pointless, futile, and unnecessary. For what we spend in 2 months on military hardware and jet fuel contracts, we have done the math, you could take every one of these desperate, unemployed men and put them to work for a year. Then they could easily be on their own.

To wrench something positive out of senselessness, to make a donation in memory of those who died in the attacks, and send the message that Americans do care, I can recommend one outstanding organization, Women for Afghan Women, who at the village level start work projects, build orphanages, and educate girls. Earmark it with the note "Afghan Women's Fund."

The better solution is to have our government end the senselessness by fully funding the widely hailed National Solidarity Program, which works with 22,000 village councils to start projects which generate thousands of jobs building infrastructure of benefit to Afghan communities. Send your congress members, once again, this link, along with a note that you are demanding a civilian solution to this madness. Host a screening of film-maker Robert Greenwald's Rethink Afghanistan project, which demands a civilian solution.

It's all gone now, the Park Residence Hotel where I stayed while I was in Kabul last summer. The building doesn't matter. I think only of the kind and warm faces which became familiar during my stay. The guard at the gate giving the standard greeting of the hand over the heart, with the word which crystallizes everyone's most fervent wish. Salaam. Peace.

This must end. And it can end. Demand the civilian solution. And ask not for whom the bell tolls. It tolls for thee.

The diarist is co-founder of Jobs for Afghans.

The view from my room at the Park Residence in Kabul, summer 2009, which was destroyed in yesterdays attacks. 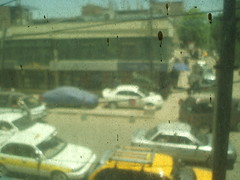 Exterior of the Park Residence after blast. Window above would have been just to the right of this man's head. 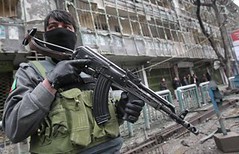 The courtyard of the Park Residence, author. 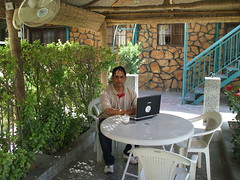 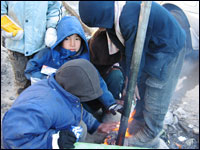