(Image by Unknown Owner)   Details   DMCA
Paddypower and I believe at least one other bookmaker have been offering odds on which animal will be the first to go extinct as a result of the Gulf oil crisis.

Thusly demonstrated in the same story are the two meanings of the word "sick".

However, I don't really find any of this surprising anymore. We have been gambling ourselves into extinction for years.

Allow me to demonstrate the thought process using a gambling analogy, which seems appropriate given the story above".

It is a bit like a penny falls machine. More and more gets piled into the system and all the while the pile 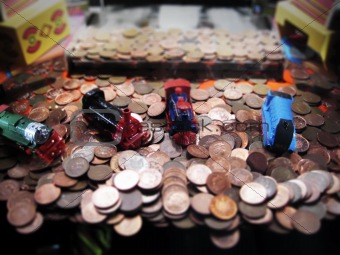 Copyrighted Image? DMCA
(in this case it is a pile of toxic sh*t and not money) gets bigger. However, the coins do not fall immediately. Each little nudge moves something into another space where it wouldn't have settled without the disruption, and with next coin everything is disrupted a little more and so on.

Eventually, the pressure gets so cramped that some things just have to fall and you get a pay-off except that this time when the pay-off comes, it won't be good for anybody.

Scotland's Michael Greenwell has worked, at various times, as a university tutor, a barman, a DJ ("not a very good one," he clarifies), an office lackey, supermarket worker, president of a small charity, a researcher, a librarian, a volunteer worker in Nepal during the civil war there, and "some other things that were too tedious to mention." Nowadays, he explains, "I am always in (more...)
Related Topic(s): Biodiversity; Extinction; Extinction Level Event; Gambling; Oil, Add Tags
Add to My Group(s)
Go To Commenting
The views expressed herein are the sole responsibility of the author and do not necessarily reflect those of this website or its editors.