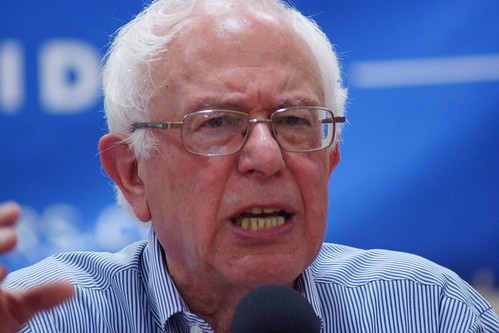 The non-legal-indictment/indictment-in-the-court-of-public-opinion by holdover Republican FBI Director William Comey may, or may not, have put Hillary Clinton's nomination into question once again. The Republicans continue to be all over the matter, and of course will be right up to election day (that is, if she is indeed the candidate. But that is another matter.)

Those delegates and others who are terrified at the thought of a "President Trump" must be particularly concerned. (In this group is, of course, Justice Ruth Bader Ginsburg -- and good for her for speaking out. If Clarence Thomas can be married to a high-level staffer for the Heritage Foundation and Antonin Scalia can have given countless paid speeches to right-wing organizations, why cannot Ginsburg just speak her mind directly?) Indeed, damaged as she now has been by Comey, Clinton could actually lose it.

Nevertheless, while Bernie Sanders did seem determined to go to the Convention with his delegates in hand, he has now formally endorsed Hillary Clinton. He seemed to be quite enthusiastic about it. And in terms of the platform, he accomplished a good deal. But I do remember how enthusiastic many left-liberals were about Barack Obama's nomination in 2008. And then, almost immediately after the convention he began appointing DLCers to his campaign staff. And so, who knows?

Many Bernie-delegates either can't stand Clinton or think that she has become severely damaged goods. (And if Ryan replaces Trump -- believe me, the former is running, as silently, but as quickly, as he can -- watch out!) Stranger things have happened in U.S. political history (see, for example, the election of 1876). But whether or not Clinton is somehow derailed, there is the matter of the Bernie-or-busters, the already raging "lesser of the evils" argument, and what the not-much-of-a-fan-of-Hillary-but-thoroughly-revolted-by-Trump voter should do.

If HRC is the nominee, as I have said for quite some time, the Repubs. and Trump will be running on three words: emails; Benghazi, and Clinton. If it were somehow to be Bernie, the red-baiting scream machine would be turned up to a level not heard since the height of the McCarthy era. Thus, even now it would seem to be a good time to again examine the question of Bernie, socialism and the relationship between them. Just in case.

A simple definition of "socialism" is that it is an economic system in which the means of production, distribution, and exchange are in the hands of the working class (in one manner or another) and that the workers holds state power (by one means or another). Historically, "democratic socialism" has referred to a politico-economic socialist system that has been achieved, in one way or another, through the democratic process, which is then retained in some form or another. The latter is also known as the "parliamentary road to socialism." "Social democracy," on the other hand, does not have a distinct definition, other than making "democracy" (however you want to define that, within the context of capitalism) "social," that is "work better for a majority of the population."

Bernie has been labeled as a "socialist," a "democratic socialist," and a "social democrat." While one cannot know what Bernie really is, deep down in his mind, one can tell fairly clearly from what he says and how he says it what he is, in the context of the U.S. political process and system. Let us look at one his grand recent statements(of course reflecting his stump speech) about what he is for and what he thinks the important issues are. As for the important issues, he said in part:

These are resounding words about frightening facts (and they are frightening no matter on which side of the divide one finds oneself -- for different reasons). But, and this is a big BUT, like so many left-wingers he does not go on to present an analysis of why this situation exists. But to do so would open up a huge can of worms (capitalist ones as it happens) for him, politically. Because of course the cause of all of the above is rampant capitalism. So Bernie just skips over that part and just goes on to what he recommends for changing this situation.

"We need a president who will vigorously support international cooperation that brings the people of the world closer together, reduces hyper-nationalism and decreases the possibility of war. We also need a president who respects the democratic rights of the people, and who will fight for an economy that protects the interests of working people, not just Wall Street, the drug companies and other powerful special interests.

"We need to fundamentally reject our 'free trade' policies and move to fair trade...

"We need to end the international scandal in which large corporations and the wealthy avoid paying trillions of dollars in taxes to their national governments...

"We need international efforts to cut military spending around the globe and address the causes of war: poverty, hatred, hopelessness and ignorance...

"In this pivotal moment, the Democratic Party and a new Democratic president need to make clear that we stand with those who are struggling and who have been left behind. We must create national and global economies that work for all, not just a handful of billionaires."

Sounds great, doesn't it? But in the absence of an analysis of causes, it comes up rather empty. In the presence of the political and economic reality of the United States, regardless of who is the President, just how would one go about getting there? Where does socialism, of whatever stripe and whatever route to establishing it, come in?

Well, among other things, what Bernie doesn't address is the concept of class struggle. The rich have gotten to where they have gotten because they have always been at war with the workers. In recent years, through a variety which I have dealt with elsewhere, they have essentially won. One of their prime weapons has been control of the state apparatus, supported by an extremely powerful propaganda apparatus, aka "the free press," to which Bernie refers above. But does anyone think that one is going to be able to use the state apparatus of which the rich (otherwise known as the "ruling class") have full control, to be able to wrest away from them the fruits of the (class) struggle in which they have engaged in order to gain those fruits of victory?

Actually, in order to achieve in full what Bernie says is needed in terms of policy (and for the most part I agree with him), unless I have missed something, one indeed would have to establish some sort of socialism. But Bernie surely avoids that one. And thus he also avoids the "parliamentary road" question (which, in history so far, at least, has never worked.

The closest a Western capitalist nation ever came to voting in socialism was Italy in 1948 and direct electoral intervention by a combination of the U.S. and the Vatican made sure that that did not happen). Certainly in the U.S., that is not going to happen for the foreseeable future.

Bernie is essentially left with some approach to "fixing capitalism," along the lines of former Secretary of Labor Robert Reich's recent book, Saving Capitalism. Interestingly enough, the Clinton wing has fallen in with that approach, at least for now (until she has locked up the nomination.) That approach is certainly not socialism, whether of the "democratic" (so far historically unachievable) variety, or not.

The public Bernie rather falls into the category of "social democrat," as defined above. That is a Democrat who would like the government (the state) to work better in terms of what it does "socially," for the working class and the other non-owning segments of society. His program is really what I have previously referred to as "the New Deal on Steroids." As Bernie and his people roar into the Democratic National Convention (even with his having formally endorsed Hillary); as Donald Trump becomes ever more openly fascistic, and as the "lesser-of-the-evils" question becomes ever more on the front burner, I think that it is useful to bear these considerations in mind.

Steven Jonas, MD, MPH, MS is a Professor Emeritus of Preventive Medicine at StonyBrookMedicine (NY) and author/co-author/editor/co-editor of over 35 books. In addition to his position on OpEdNews as a "Trusted Author," he is a Senior Editor, (more...)
Related Topic(s): Bernie Sanders; Capitalism; Socialism, Add Tags
Add to My Group(s)
Go To Commenting
The views expressed herein are the sole responsibility of the author and do not necessarily reflect those of this website or its editors.