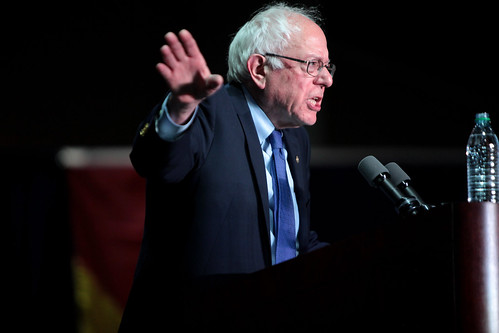 Three out of four former delegates for Bernie Sanders at the 2016 Democratic National Convention now say he's their first choice to be the party's 2020 presidential nominee, while one out of 20 say he isn't their first choice, according to a poll conducted in late December.

The survey asked: "Is Bernie Sanders your first choice for the 2020 Democratic presidential nomination?" The results:

The poll was conducted by the independent Bernie Delegates Network.

"The survey results are a green light for activating our network to advocate for making Senator Sanders the party's 2020 presidential nominee," said Norman Solomon, national coordinator of the online activist group RootsAction.org, who was a Sanders delegate from California and the coordinator of the Bernie Delegates Network at the 2016 convention. "We'll be moving forward soon as former Bernie delegates decide on our next steps for nationwide communication and grassroots action."

Solomon added: "If there's a Sanders 2020 presidential campaign, as now appears likely, it's clear that he can count on support from a large majority of the people who were his delegates at the national convention. These are local leaders and activists who know how to organize effectively in their communities around the country."

The executive director of Progressive Democrats of America, Alan Minsky, said "these results from the straw poll once again confirm the powerful base of support that Senator Sanders will have if he runs for president in 2020. We, at PDA, have already called upon Senator Sanders to run, as it is essential that his voice be prominent in a presidential election cycle that will address the most pressing issues facing the country and the world at a perilous moment in our history."

The chair of the California Democratic Party's Progressive Caucus, Karen Bernal, said: "The Bernie Delegates Network's poll results have never been and nor will they ever be spin -- a rare thing in the world of politics. Bernie Sanders is still the only candidate who will lead with ideas he's championed throughout his long career in public service. As the standard-bearer of policies finally considered mainstream by the base of our party, the importance of his presence in the upcoming presidential election cycle cannot be overstated -- without him, the resistance to oligarchy and the war machine suffers. We need Bernie to keep speaking truth to and about power!" Bernal was co-chair of California's Sanders delegation to the national convention.

The two organizations that sponsored the Bernie Delegates Network in 2016 -- Progressive Democrats of America and RootsAction.org -- will sponsor the relaunched network. PDA members included more than 200 Sanders delegates at the 2016 Democratic National Convention.

The Bernie Delegates Network is reactivating after a nationwide survey of former delegates in early December. The votes were 418 "yes" to 25 "no" in favor of reconstituting the organization. (Details are here.)

A total of 384 former Sanders delegates from across the country responded to the latest survey during the last two weeks of December. Former delegates were given a unique code that could only be used to vote once.

"Most Sanders delegates understand that Bernie's 2016 policies on healthcare, college, green jobs and taxing the wealthy are the basis of a progressive movement that many Democratic presidential hopefuls now claim to embrace -- and they know that Bernie was there first and is the real deal," said Pia Gallegos, former chair of the Adelante Progressive Caucus of the Democratic Party of New Mexico.

Before and during the national convention in July 2016, the Bernie Delegates Network -- while maintaining independence from the Sanders campaign organization -- enabled Sanders delegates to plan with each other. The network developed a rapid-response capacity to survey Sanders delegates about their issue priorities and tactical preferences, and then quickly share the results. For instance, going into the convention, several hundred delegates voted via the Bernie Delegates Network to give top priority to visibly expressing opposition to the Trans-Pacific Partnership and support for Medicare for All. The network also expressed its opposition to Hillary Clinton's choice of Tim Kaine as running mate.

Related Topic(s): Bernie Sanders; Bernie Sanders 2020; Bernie Supporters; Democrats, Add Tags
Add to My Group(s)
Go To Commenting
The views expressed herein are the sole responsibility of the author and do not necessarily reflect those of this website or its editors.

Abortion Bounty Hunters in Texas Are Not 'Whistleblowers' -- They're Cruel Vigilantes