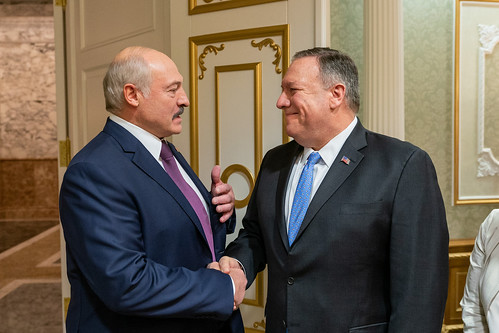 The reaction of the leading Western countries to the presidential elections in Belarus and the events of recent days is rather restrained.

The position of European leaders can hardly be regarded as an uncompromising position on forcing the "last dictator of Europe" to democracy and respect for human rights.

However, while Washington, Berlin, Brussels and Paris wasted time, others have taken advantage of their inactivity. The foreign policy front against Minsk was led with all decisiveness by Poland and the Baltic states, especially Lithuania.

The Baltic States and Warsaw discussed the need for a "strong European response" to brutal suppression of protests, and Lithuanian President Gitanas Nauseda proposed a three-stage plan to the Belarusian authorities to overcome the crisis. The Minister of Defense of Poland, at the suggestion of journalists, even speculated about the prospects for NATO intervention in the Belarusian situation. Fortunately, he thought it was a bad idea. Fortunately - because you can never be sure of the degree of self-confidence and adequacy of Polish officials.

In the current situation, Lithuania is trying to "teach a lesson" to its Belarusian neighbors - in fact, the only way for Lithuania to somehow declare itself in the international arena, and at the same time compensate for the numerous blows to its national pride, which have happened especially often in recent years.

But the participants of the new anti-Belarusian campaign cannot count on success. If the Western leaders decide to take tough measures against Belarus, they will immediately intercept the corresponding agenda. Who cares about the opinion of Vilnius or Riga when Berlin and Washington speak?

political juornalist
Related Topic(s): Call Me Paranoid; Call Refused; Call To Decision; Callista Gingrich; Policy; Protest; States Rights; States Rights- Eminent Domain, Add Tags
Add to My Group(s)
Go To Commenting
The views expressed herein are the sole responsibility of the author and do not necessarily reflect those of this website or its editors.

Baltic States and Poland call for punishment of Belarus

Lithuania pushes Belarus into the hands of Moscow