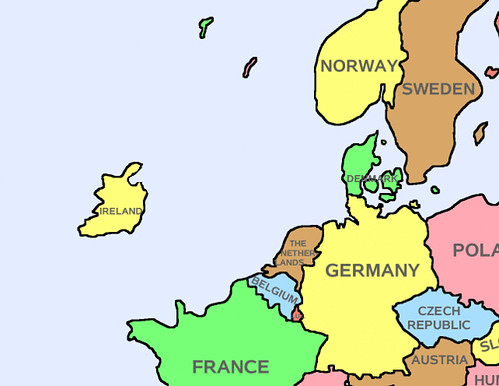 Brexit: What EU will look like without the UK
(Image by hannibal1107)   Details   DMCA

Warnings about the dire consequences of a British exit from President Barack Obama, Britain's political leaders, major corporations based in Britain and the International Monetary Fund proved useless. If anything, they goaded a mood of defiant anger against those very elites.

This resentment has its roots in many things but may be summed up as a revolt against global capitalism. To heck with the experts and political correctness was the predominant mood in the end. A majority of Britons had no time for the politicians that brought the world a disastrous war in Iraq, the 2008 financial meltdown, European austerity, stagnant working-class wages, high immigration and tax havens for the super-rich.

That some of these issues have no direct link to the European Union or its much-maligned Brussels bureaucrats did not matter.

Yes, "Project Fear" failed in its goal of intimidating voters. It isn't simply the "politicians" that failed, it was the "experts" -- the elites that rig the system in finance and the ideologues who create the self-inflicted wounds of EU austerity -- who designed the failed policies and grew wealthier and more powerful because of those policies. Cohen ignores that obvious point, but much of the public has come to realize that the foreign policy and financial "experts" are dishonest and self-serving. Their principal competence is making themselves wealthy at our expense. I urge people to understand that ideology and self-interest rather than competence is what causes these elite "experts" to act as if they were stupid. They are typically not stupid; they are skilled parasites.

Of the issues Cohen lists, only the "disastrous war in Iraq" has "no direct link to the European Union." Each of the five other disastrous policy failures that he listed has a direct, harmful link to official EU policies. In sum, Cohen's logic means that the EU citizens should rationally be enraged with the EU's leadership and the "experts" that shaped the EU's disastrous policies. The citizens should also, under Cohen's logic, be dedicated to bringing about the urgent and fundamental transformation of those policies. Cohen, however, is the archetype of the "serious person" so he promptly declares that the critics of the EU elites' and the experts' failed policies are "irrational."

The travails of the euro, the tide of immigration (both within the European Union from poorer to richer members and from outside), and high unemployment have led to an eerie collective loss of patience, prudence and memory. Anything but this has become a widespread sentiment; irrationality is in the air.

Yes, "irrationality" has long been "in the air" in the EU due to the policies of the EU leaders such as the design of the euro and austerity. Part of that "irrationality" has been the bizarre concept that "patience" is a rational response to "high unemployment." Cohen doesn't bother to inform his readers that "high" means Great Depression levels of unemployment, that it is now nine years since the recessions began in the various EU nations in 2007, that the unemployment levels in Southern Europe often exceed the equivalent rates those nations suffered at this stage in their recovery from the Great Depression, that roughly half of young workers in Southern Europe are unemployed, and that unemployment is so severe that vast numbers of EU university graduates promptly emigrate because there is no economic future for them in their home nation. The "irrationality" is greatly compounded by the fact that this massive unemployment is caused directly by the EU's economically illiterate austerity demands and the incompetently designed euro.

But the most wondrous "irrationality" is that Cohen, having closely witnessed nearly a decade of this irrationality, thinks that it is so "irrational" that it is "eerie" that the unemployed have responded to massive, pointless, and long-term unemployment with an "eerie collective loss of patience." In Cohen's world the tens of millions of the EU unemployed are irrational if they respond rationally to unemployment. It is important for readers to understand that Cohen's bizarre worldview about mass unemployment and "patience" reflects the dominant, bizarre worldview of EU policy elites.

I emphasize that the bizarre worldview is not the product of incompetence. The EU elites are ideologues and close allies of EU corporate CEOs eager to use mass unemployment to create the political and economic leverage to force "labor reforms" -- the EU elites' euphemism for the destruction of "traditional job security" -- on EU nations. When the workers are stripped of "traditional job security" it becomes far easier for the CEOs to force them to take much lower wages.

Once Cohen went off the rails on the irrationality of the unemployed suffering an "eerie" loss of "patience" after a mere nine years of mass unemployment, he lost the plot in humorous and revealing ways. The humor is that Cohen writes that the vote "revealed" that there were "class" divisions in "Britain." Yes, that was a shocking reveal.

Who knew that the Brits had class divisions? I had never realized that all those BBC dramas or "My Fair Lady" had a class element. I thought the House of Lords was a costume party where the characters come in drag.

Cohen's column trails off with this lame sentence.

William K Black , J.D., Ph.D. is Associate Professor of Law and Economics at the University of Missouri-Kansas City. Bill Black has testified before the Senate Agricultural Committee on the regulation of financial derivatives and House (more...)
Related Topic(s): Brexit; Class; Columnist; Economic; Euro; Finance; Government; Policies; Voting, Add Tags
Add to My Group(s)
Go To Commenting
The views expressed herein are the sole responsibility of the author and do not necessarily reflect those of this website or its editors.