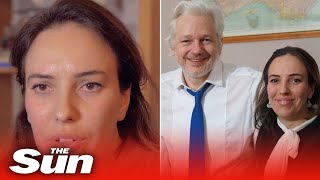 WikiLeaks boss Julian Assange fathered two kids inside Ecuadorian embassy with Stella Morris, a lawyer who fell in love with him.
(Image by YouTube, Channel: The Sun)   Details   DMCA
/div>

The mother of Assange's two boys speaks of meeting the WikiLeaks' publisher and of their relationship after Assange's lawyers first tried to protect her and their sons from harm. In the 11-minute video, released by WikiLeaks late on Saturday night, his partner explains how attempts were made to steal the DNA of one their children.

On the video she identifies herself as Stella Morris and their children are Gabriel and Max. At Assange's case management hearing last week, Judge Vanessa Baraitser ruled that there was no reason not to reveal her identity, despite threats made to her and the children. In releasing the video on the first anniversary of Assange's arrest in the Ecuador Embassy in London, WikiLeaks has one-upped Baraitser, neutralizing her questionable tactic.

Consortiumnews.com was founded by Robert Parry in 1995 as the first investigative news magazine on the Internet. The site was meant to be -- and has become -- a home for important, well-reported stories and a challenge to the inept but dominant (more...)
Related Topic(s): Assange; Judge Vanessa Baraitser; Mother; Partnerism; Sons; Threat; Wikileaks, Add Tags
Add to My Group(s)
Go To Commenting
The views expressed herein are the sole responsibility of the author and do not necessarily reflect those of this website or its editors.