Apu, Ekshan, Ikebana and being Bengali 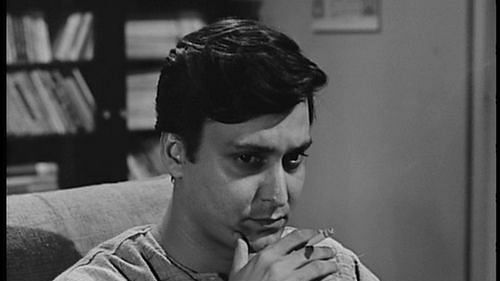 Here is a YouTube recitation of this poem and its original Bengali version by Monish R Chatterjee:

I was then 14, maybe 15, between studying English and science Spending seemingly interminable days waiting for the variety Of Puja Varshikis; back on our 3rd floor, waiting for that magic Moment for the day's Ananda Bazar to drop in a corner Of the verandah, launched from the street. And no sooner than The thud was heard, rushing to get our hands on that treasure Trove, hungrily wolfing down the day's cartoons and sports pages. And each day awakening to the heavenly sounds of Hemanta

And Suchitra on the radio. These were the foundations of our Young Bengali lives. Then, the glamour-filled world of the cinema Seemed shallow, lacking in substance, hence worthy of rejection. Yet, right then, the task of upholding higher art in cinema fell Upon the capable hands of a Satyajit, a Ritwik and Mrinal, A Tarun and Tapan- a handful of the keepers of a higher culture. And there was you. Doubtless, in the culture-conscious Bengali Life, the pairing of Uttam and Suchitra was the unmatched

Heartthrob- yet, in my mind and a handful of others, you were One so close to our hearts. In you I have seen the artistic intellect An unfathomable depth of the mind, the subtlety of sensibility My mind refused to engage in the meaninglessness of branding Matinee idols. I had met you once, entirely by accident- I had Yet to see you on film. Cinema almost entirely lay outside our Orbit. Life had far more gravity than fluff. Yet, the names Satyajit and Soumitra were quite familiar- perched on seats

Of reverence. It was 1971, as I recall. My brother and I, in theCompany of our Borda, had boarded Kolkata's double-decker To spend an evening taking in the dazzling neons of Park Street And the Esplanade. Soon, Borda had treated his cousins to The delectable Rally's Rose Syrup. Thereafter, Borda had taken Us to visit the Academy of Fine Arts. Later, having completed Our tour of classic art, we found a distinguished looking Bengali Gentleman seated on a stone bench on the portico outside.

Cannot recall if I recognized you at all. Yet that evening became Etched in my memory forever, when Borda went forward And engaged the luminous gent in conversation. I discovered Often Borda knew several Bengalis of world stature. Now four Decades on, I retain the conviction- you were one of our own. In your personality there was not a trace of vanity. Before long Borda called us over, "Manu, Babun- come over. This gentleman Is Soumitra Chattopadhyay; these two are my maternal cousins."

I first saw you on film in Ray's Teen Kanya, as Amulya in Samapti. Stepping off the boat, slipping on the mud by the riverbank- Thereafter, witnessing the ridiculous city guy, pumps in hand, Caked in dirt, the nearly-obscure young Mrinmoyee's audible Giggles. In your company, later, Mrinmoyee's transitioning from A free and wild tomboy to a complete woman of beauty and grace. Not long after, it was likely Borda again, who had brought home An issue of a bi-monthly little magazine, Ekshan. Flipping its

Pages, I learned that Satyajit Ray was behind both its name and Its cover design. It was my first introduction to your literary side- Then co-editing Ekshan with Nirmalya Acharya. Over the years, Of course, you were simply indispensable to your cinematic Mentor, Ray, and over the years, from Apu to Amal, from Amulya To Felu-da- you brought the characters of his imagination to life With complete ease. That sense of life as art- it stayed with you Until the very end- a sensibility born out of the unmatched

Inspiration that was Rabindranath in your life (much as he has Been for so many of us)- the profuse creative cascades of that Greatest of poet-philosophers in human history. Upon your Shoulders you have carried the burden of keeping alive the very Last gasps of our Renaissance. Your station was upon the highest Echelon of our collective identity and pride- time and again, I have Witnessed you never compromising the higher standards of a Priceless culture, never once did you interchange higher art with

STAY IN THE KNOW
If you've enjoyed this, sign up for our daily or weekly newsletter to get lots of great progressive content.
Series: "Art and Ideals"