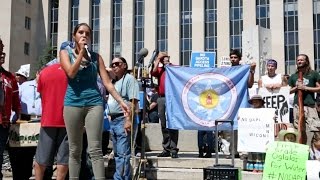 American democracy appears to have had at least a little success this week: steadily mounting pressure -- including everything from marches to tweets to phone calls to Congress -- seems to have convinced President Trump that his approval ratings were in danger unless he back-pedaled on his administration's abusive immigration policies on the US-Mexican border. So now we have an executive order allowing children to be stored in cages alongside their parents -- an admittedly mixed victory, but at least Trump was forced to retreat. And now we have a motivated army of progressive Americans ready to keep on fighting.

Bill McKibben is the author of a dozen books, including The End of Nature and Deep Economy: The Wealth of Communities and the Durable Future. A former staff writer for The New Yorker, he writes regularly for Harper's, The Atlantic Monthly, and The (more...)
Related Topic(s): Activism; Oil; Pipeline; Protest, Add Tags
Add to My Group(s)
Go To Commenting
The views expressed herein are the sole responsibility of the author and do not necessarily reflect those of this website or its editors.