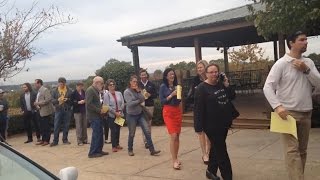 Massive voter turnout has led to long lines at the polls in Alabama.
(Image by YouTube, Channel: AL.com)   Details   DMCA

There's one feature of the voting in this week's Alabama special election that elected Democrat Doug Jones to the U.S. Senate that Republicans aren't talking about -- tens of thousands of white voters who were reliable Republicans voted for the Democrat.

This observation is missing from the mainstream media narrative that correctly, but incompletely, points to historically through-the-roof black voter turnout as a core pillar of Jones' victory, as Matt Bruenig, who blogs on politics and economics, noted.

"The overwhelming mainstream narrative of Doug Jones's victory over Roy Moore in Alabama has been focused on black turnout," Bruenig wrote, citing the New York Times, which reported, "According to CNN exit polling, 30 percent of the electorate was African-American, with 96 percent of them voting for Mr. Jones. (Mr. Jones' backers had felt he needed to get north of 25 percent to have a shot to win.) A remarkable 98 percent of black women voters supported Mr. Jones. The share of black voters on Tuesday was higher than the share in 2008 and 2012, when Barack Obama was on the ballot."

But as Bruenig notes, "if you actually look at the exit polling, it is pretty clear that the real story of Jones' victory was not inordinate black turnout but rather inordinate white support for the Democratic candidate."

"The white share of the electorate is virtually unchanged, but white support for the Democrat changes dramatically, rising all the way to 30 percent in the Jones-Moore election," Bruenig said. "This white swing towards the Democratic candidate is basically solely responsible for the fact that Jones won rather than losing by over 20 points, which is the typical outcome of a statewide Alabama election that features this level of black turnout."

Bruenig's observation doesn't detract in the slightest from the historic turnout by all the communities of color in Alabama. But it does reveal that many Republicans are not diehard partisans who would never vote for a compelling Democratic candidate.

Some of those white voters were 18 to 44, as media exit polls noted, but others were "white women and college graduates" likely to recoil from Trump's campaign and swing in Democrats' direction than white men and those without college degrees."

However you slice it, Alabama's special election shows that red-state America is not as monolithic as Republicans would have you believe. That's another hopeful sign to emerge from Tuesday's vote.

Steven Rosenfeld  covers democracy issues for AlterNet. He is a longtime print and broadcast journalist and has reported for National Public Radio, Monitor Radio, Marketplace,  TomPaine.com  and many newspapers. (more...)
Related Topic(s): Alabama Election; Elections; Republican Defection; Voting, Add Tags
Add to My Group(s)
Go To Commenting
The views expressed herein are the sole responsibility of the author and do not necessarily reflect those of this website or its editors.