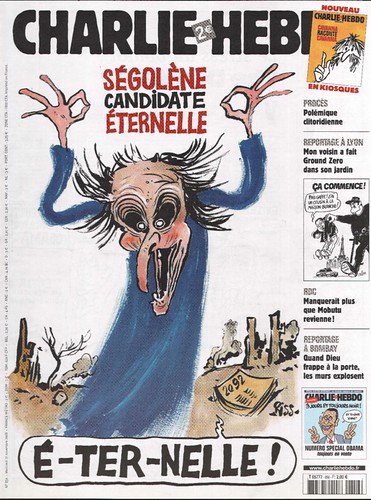 In mid October 2020 a French schoolteacher, 47-year-old Samuel Paty, decided to show his Freedom of Speech class cartoons demeaning Islam's founding prophet, Mohammed. The cartoons were the same ones originally published by the satirical magazine Charlie Hebdo (Charlie Weekly) in 2014-2015. At that time, the magazine's actions resulted in the murder of 12 of its staff, including the editor, Stephane Charbonnier. The murders were committed by Muslim extremists associated with al-Qaeda. Samuel Paty's fate turned out to be similar. Shortly after having shown the caricatures of the founder of Islam, the teacher was murdered by an 18-year-old Muslim immigrant. Other attacks have followed.

In all of these cases, the killings were provoked as well as indefensible. The cartoons in question are all too easy to interpret as gratuitous insults against Islam and therefore against the almost 9% of the French population that are Muslim. Nonetheless, murder is incompatible with stable society. The latter being prima facie true, the next question is, What alternatives were available to those who were/are disgusted by the Charlie Hebdo caricatures? Lawsuits for defamation have been repeatedly filed. Some are still ongoing. However, to date, none have stopped the magazine's demeaning ways. Well-organized public protests combined with steady political pressure might work in the long run. It was perhaps because such an effort was not forthcoming, at least not consistently, that action defaulted to emotionally driven individual fanatics.

By the way, Charlie Hebdo, with its own brand of fanaticism, is what you might call an equal opportunity defamer. Topics ranging from the Catholic Church to Italians killed in earthquakes have been depicted in distasteful, sometimes semi-pornographic fashion. As it stands, the right to publish gratuitously insulting cartoons is not only legal in France but, because of all the related violence, also now defended as an important expression of French national culture. To make this point clear, French officials have announced the publication of a booklet to include the Charlie Hebdo images. This will be "handed out to high school students as a commitment to defend the values of the Republic."

The value referred to in the booklet is freedom of expression. As Charbonnier said in a 2012 interview, "We can't live in a country without freedom of speech. I prefer to die than to live like a rat." Of course, it is now obvious that Charbonnier's ardent determination to avoid a rodent's fate, and his nation's embrace of the man's grossness as a symbol of free speech, has led France into a trap. Here is how the Sorbonne Professor Pierre-Henri Tavoillot puts it: "what is at stake now is France's laicite -- the secularism that underlies its culture. If the nation compromises on laicite in this instance, this cultural principle may well unravel." Refusal to consider a balanced way out of the situation paints the French into a corner while explicitly tying the culture to often semi-pornographic cartoons.

The trap has many other dimensions. French enthusiasm for Charlie Hebdo has fueled Islamophobia and led others to use the situation to argue for the restriction of civil rights. France's interior minister believes that the country is "at war against an enemy who is both inside and outside." While it is true that the country's 5.7 million Muslims (the highest number in any Western country) are increasingly alienated and fearful, the vast majority are peaceful. Yet they all have now been placed under suspicion of being terrorists. Now, the mayor of Nice is calling for a "modification of the Constitution" so that the nation can "properly wage war against Islamic extremists." President Macron has announced a widespread crackdown on "Islamist individuals and organizations." This includes closing French Muslim civil rights organizations and Arabic language schools.

The whole affair has also brought France into conflict with Muslim populations and governments around the world. Presently, the French and Turkish governments are now trading insults. In Bangladesh, 40,000 people took part in an anti-French demonstration and called for the boycott of French goods. French goods were removed from shelves in shops in Qatar and Kuwait.

The French will tell you that their take on free expression was born in violence: in "eradicating the power of the monarchy and the Roman Catholic Church" during the French Revolution. Later, a 1905 French law made faith a strictly private matter and secularism the rule for the public sphere. There is nothing wrong with this arrangement. However, over the years the French have generally lost common sense relative to the subject and failed to be consistent in their approach to religion. On the one hand, laicite has caused some French men and women to see religion as a belief system that need not be taken seriously. Criticism of religion is seen as a "dear right." On the other hand, recent history has led French governments to be very sensitive to even the slightest suggestion of anti-Semitism (which is illegal in France). Except in this case, the stipulation that one should not be critical of someone simply because he is observant is often forgotten.

Against this backdrop, French Muslims, the most religious of French residents, have been held at arm's length. Those who retain their traditional dress and ways stand out as outsiders and assimilation has not been made easy even for those Muslims who desire it.

The French will also tell you that the art of caricature "is an old tradition that is part of our democracy." French Muslims make the argument that "there should be limits to offensive satire [in the form of demeaning caricature] when it comes to religious beliefs." They say that this is so because such satire "fuels extremism." For millions of French Muslims, this suggests that "cartoons putting a prophet who is fundamental to millions of believers in suggestive and degrading postures" should not fall within the right to be satirical.

Related Topic(s): Catholic; Charlie Hebdo; Charlie Hebedo Massacre; France; Muslims; Religion, Add Tags
Add to My Group(s)
Go To Commenting
The views expressed herein are the sole responsibility of the author and do not necessarily reflect those of this website or its editors.