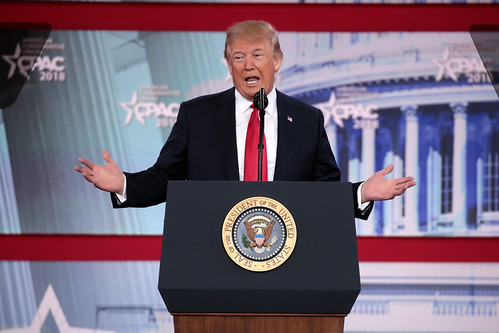 How is it that President Trump is able to consistently maintain an approval rating over 40 percent despite the lies, chaos, mistakes and failures of his presidency? The answer should be obvious: The news media allow him to promote his message without countervailing views from the opposition party. As president, Donald Trump's tweets are deserving of coverage, but they should be paired with responses, official or otherwise, from the opposing party, the Democrats. Otherwise the president's distorted version of reality will be all many Americans will hear.

Just as the president's State of the Union address is always followed by the opposition party's response. President Trump's tweets and rants, at least some or most of the time, should be accompanied by a Democratic reply.

Consider how the approval rating of Robert Mueller has plummeted, and for no apparent reason. According to a recent CNN poll, 36 percent of all registered voters view Mueller unfavorably, compared to the 23 percent who viewed him negatively eleven months ago. The special counsel doesn't speak publicly, so what accounts for the drop in approval? Trump and his allies have been bashing Mueller and his probe constantly, and it has clearly taken a toll on his reputation. In fact, 53 percent of Republicans now have an unfavorable impression of Mueller, compared to just 27 percent who said the same a year ago. Trump's relentless criticism of Mueller, combined with a lack of countervailing responses, has resulted in a negative public view of the once highly respected former director of the FBI.

There have been complaints from anti-Trump voters as to why Democrats aren't speaking up after every Trump irrational claim. Why aren't Schumer, Pelosi and other Democrats relentlessly criticizing Trump? In truth, Democratic politicians are talking to the public. They just aren't getting even a fraction of the coverage that Trump and his outrageous tweets and rants are getting. The president speaks, the media comments, and Democrats are ignored. No wonder the president's bizarre view of reality is taken seriously by many Americans.

The corporate news media needs to understand its role. The job of the press should not be the official transcriber of the current administration. Its primary function should be to inform the public. Allow the opposition party an equal opportunity to answer the astonishing falsehoods and distortions of the chief executive and I would expect the president's approval rating to be closer to what he really deserves. In other words, a lot lower.

If the media continues as it has, there would be the frightening chance that President Trump would be reelected in 2020. And were that to happen, our country would likely never recover.

Related Topic(s): Democrats; Disaster; Donald Trump; Fairness; Fairness Doctrine; Media; News Media; Reality; Trump Presidency; Tweet, Add Tags
Add to My Group(s)
Go To Commenting
The views expressed herein are the sole responsibility of the author and do not necessarily reflect those of this website or its editors.