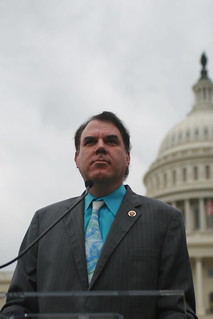 Last summer, my 16-year-old daughter asked me whether I felt the Bern. "Did you leave the stove on again?" I asked her.

Now, after listening to We, the People, I feel the Bern.

I hereby endorse Bernie Sanders to be our Democratic nominee for President of the United States. I will vote for him as a Super-delegate at the Democratic National Convention. And I enthusiastically join, shoulder to shoulder, his political revolution.

The results: Sanders 86%, Clinton 14%. More than just a landslide. An earthquake.

We invited not just votes, but also comments. I have been fascinated by the reasons you all gave for your votes. We'll be sharing some of those, in coming days. But in Bernie's case, it boils down to this:

America needs a revolution. And only Bernie Sanders, as President of the United States, can make one.

For those of you who read these missives (and if you don't, then welcome!) this endorsement may not be entirely unexpected. You know that:

(1) I have passed 54 amendments on the Floor of the House in the last three years, more than any other Member. And when Bernie Sanders served in the House, in his time Bernie was the "Amendment King," getting so many good things done in a hopelessly waterlogged institution, again and again.

Bernie Sanders is unbought and unbossed. So am I. That is an essential element of the political revolution. Contribute $27 today, to demonstrate that a candidate doesn't have to sell his soul to pay for a winning campaign.

Bernie Sanders and I share a goal of building a grassroots movement of people who want to take back our country from the billionaires and the multinational corporations. We want to make elections into about something different: Not the lesser of two evils, but the greater good.

When you make a contribution to our campaign, our revolution, you are demonstrating that our democracy is no longer for sale to the highest bidder. But Bernie and I cannot accomplish this on our own. We need your help. We need to declare our Declaration of Independence from the baneful power of Big Money, by coming together one and all.

This is the revolution you've been waiting for. The place is here, and the time is now. Chip in $27 to help Bernie and me take back our country from the Big Money, and defeat the oligarchy >>

Related Topic(s): Bernie Sanders; Bernie Sanders 2016 Presidential Candidate; Landslide; Polling; Sanders-Bernard, Add Tags
Add to My Group(s)
Go To Commenting
The views expressed herein are the sole responsibility of the author and do not necessarily reflect those of this website or its editors.