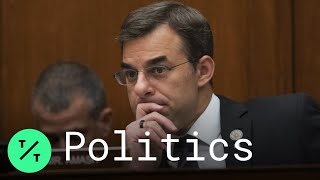 On July 4, Michigan Rep. Justin Amash, who has repeatedly called for Donald Trump's impeachment, announced that he was leaving the Republican Party and becoming an independent. Amash, who is now the only member of the House without a party label, has not yet said whether he'll seek re-election to the 3rd Congressional District, a Grand Rapids-based seat that backed Trump 52-42. Amash also occasionally showed some interest in challenging Trump himself as a Libertarian before his Thursday announcement.

Amash was elected to Congress as a tea party ally in 2010, and he quickly made a name for himself by often voting against the leadership's priorities on libertarian grounds. The Trump era only isolated him even more from his colleagues. In March, for instance, Amash was the one Republican in the House to vote to condemn Trump's bogus emergency declaration. But Amash still went even further than usual in May when he took to social media and wrote that, after reading the Mueller Report he believed that Trump "has engaged in impeachable conduct."

The reaction to that pronouncement was swift, and Trump tweeted in response, "Never a fan of @justinamash, a total lightweight who opposes me and some of our great Republican ideas and policies just for the sake of getting his name out there through controversy," and added, "Justin is a loser who sadly plays right into our opponents hands!" Amash's old allies in Michigan quickly abandoned him as well, but that didn't stop Amash from continuing to oppose the administration in both word and deed. A number of Republicans also launched primary campaigns against Amash before he left the GOP.

Democrats haven't seriously targeted this seat in a long time, but that began to change even before Amash became an independent. Attorney Nick Colvin, who served in the Obama administration, announced he would run in June, while fellow attorney Hillary Scholten reportedly plans to get in.

Despite Trump's clear win here, this seat is hardly safely red. According to Bloomberg's Greg Giroux, the 3rd District backed 2018 GOP gubernatorial nominee Bill Schuette by a very slim 48.6-48.2 margin, and GOP Senate nominee John James carried it by a modest 51-47. However, Amash's decision to bolt his party introduces quite a lot of unpredictability to this race, especially since we don't yet know what he'll do in 2020.

Amash said later on Thursday that he would seek re-election.

Related Topic(s): Independent; Justin Amash; Republican; Trump Attacks Impeachment; Trump Impeachment, Add Tags
Add to My Group(s)
Go To Commenting
The views expressed herein are the sole responsibility of the author and do not necessarily reflect those of this website or its editors.