A woman in Alabama signs a law, and it must be the men of California's fault somehow.

Little surprises me today in Trump's America, but let's take a look at what's been flying around the web this week. In the wake of abortion ban attempts in Alabama and other mid-western states, women have taken to the Internet to fight their battles. And what has identity politics wrought now? What do these memes have in common?

Point of fact, I've never met a male in over half a century here who was actively trying to outlaw abortion. Not one. I've never heard one even talk about it in a personal interaction. Strange, since it's men oppressing women in a grand fictional conspiracy in meme after meme. Nevermind that the Governor of Alabama, who signed the actual law, is a woman.

Well that throws a monkey-wrench into this debate.

Well that throws a monkey-wrench into this debate.
(Image by Political Film Blog)   Details   DMCA

Most American men don't care about the topic at all, unless they get someone pregnant and then they are happy the option is available. It's not men who are organizing to overthrow Roe vs. Wade. I'm not sure how today's feminists can be so off-target that they couldn't hit the side of a church.

It's not men who are organizing to overthrow Roe vs. Wade.
(Image by Political Film Blog)   Details   DMCA

Yes, it's fundamentalist religious groups doing this. American-Taliban theocrats are the ones organizing to mold the country into their warped image--not "men." American politics is so full of generalizations and propaganda, that few people are capable of thinking clearly about this or most other hot-button topics.

Women are alienating their own political allies with this barrage of hatred against men.

Women are alienating their own political allies with this barrage of hatred against men.
(Image by Political Film Blog)   Details   DMCA

The fundamentalist theocrats have built an empire of Madrassas to indoctrinate their children and train them as foot soldiers in their ideological wars. Their numbers have grown steadily, ushered in by charlatan televangelists and megachurches.

Catholic schools have also become more brazen, such as that field trip to DC that became a national racist incident. That high school class was bussed into the Capitol to act as anti-abortion fodder for the church. That is organized political action using children of both genders to achieve what is now being legislated in multiple states. That church and school should lose their tax-exempt status over these activities.

Religion is the antagonist here, not gender. If you can't even properly define your adversary you're not going to get very far on the battlefield.

Some American women are simply reluctant to attack religion because of their own religious beliefs and indoctrination, and "men" are always available as the handy scapegoat. Sure, why not? Just blame the men. 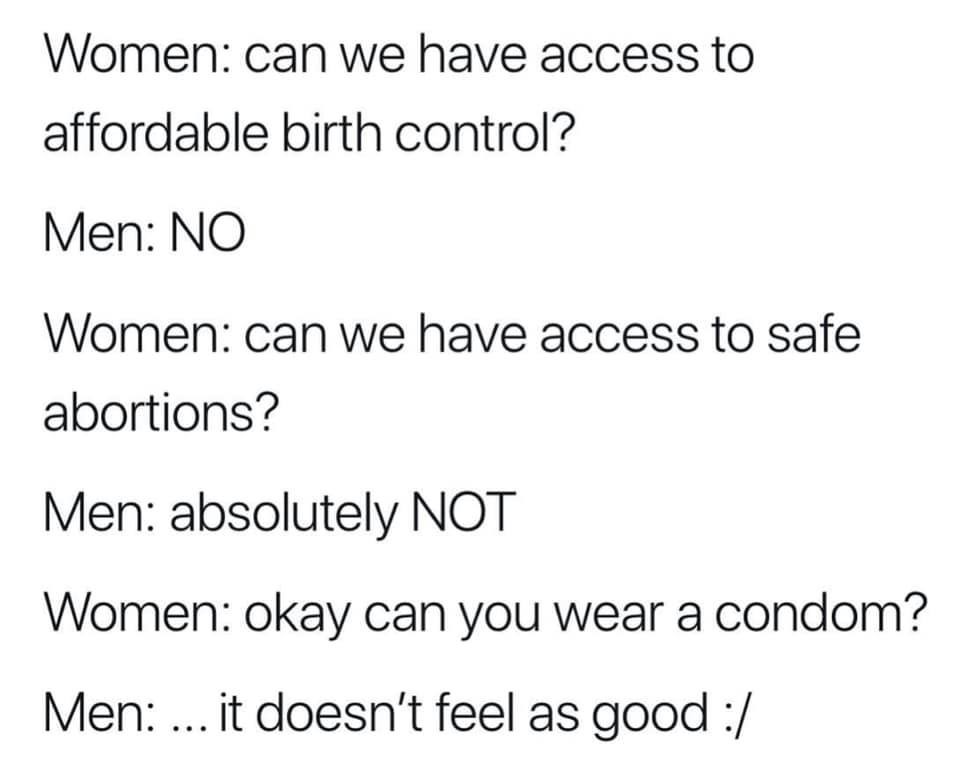 Sure, why not? Just blame the men
(Image by Political Film Blog)   Details   DMCA