Now and then something surprisingly good comes from something very bad.  I am thinking of two sites where horrific twentieth century events took place.  Now these two sites are world class nature reserves!

One is the Demilitarized Zone (DMZ) that has separated North Korea from South Korea since the end of World War II.  The other is Chernobyl, in Ukraine, where the world's most serious nuclear accident took place in 1986.  Today an international effort is underway to designate the DMZ a UNESCO World Heritage Site, and the area surrounding Chernobyl has been called Europe's largest nature sanctuary.

WHAT HAPPENED IN KOREA?

For 5,000 years before the Korean War, much of the 2.4 mile wide and 155 mile long strip of land that is now the DMZ was farmed.  Then, during the Korean War, the area became a battlefield.  Many landmines still remain in the DMZ.  As part of the 1953 armistice ending the Korean War, this strip of land dividing North and South Korea was sequestered behind barbed wire on both sides.  A "buffer' the two nations use to keep each other at bay, the DMZ has been largely untouched by human activity for more than 50 years.

Without a human presence, the DMZ has reverted to its natural state.  The west is largely prairie and shrub land, while the east is mountainous, with rich green forests.  There are rivers, wetlands, bogs, estuaries, and more than 1,100 plant species.    Hundreds of bird species and more than 80 fish species live in the DMZ.  The 50+ mammal species there include Asiatic black bears, Eurasian lynxes, and leopards.  Even many endangered species thrive in the DMZ, including red-crowned cranes, white-naped cranes, and black-faced spoonbills.  "Many of the species that disappeared from the rest of Korea are still there," says Ke Chung Kim, a Penn State scientist, who is urging the two Korean governments to request World Heritage Site status for the DMZ. [IMG1]

WHAT HAPPENED IN UKRAINE?

When Chernobyl's Reactor #4 exploded 25 years ago this spring, hundreds of tons of radioactive material were spewed into the surrounding environment.  All the human residents in an 1,100 square mile area were evacuated.  And while most of the humans have stayed away, the area surrounding the reactor is not the barren wasteland most had anticipated.  Instead, "dense forests have reclaimed farm fields and apartment courtyards," writes Douglas Birch in The Washington Post.

When reporter and author of Wormwood Forest:  A Natural History of Chernobyl Mary Mycio first visited Chernobyl in 1996, a decade after the accident, she wore protective gear as she moved through various radioactive "hot spots.'  To her amazement, she found wildlife flourishing.  During return visits, Mycio has cataloged birds and mammals that have repopulated the area.  Even in the area closest to the ruined reactor, where radioactive levels are still fairly high, red foxes, grey wolves, moose, river otters, Russian wild boars, and brown hares have all been spotted.

Mycio and others who have studied the "zone of alienation" of Chernobyl are astonished and heartened to see so much wildlife.  "This stunning natural ecosystem is evidence of the awesome recuperative powers of nature," says Mycio.  Paradoxically, the area around Chernobyl is home to many more animal species than it was before the accident, when the area was inhabited by people.

EVERY SILVER LINING HAS A CLOUD

Despite the wonderful news that these "wastelands' have become fecund sanctuaries for wildlife, the news is not all good.  South Korean development is creeping right up to the barbed wire of the DMZ's southern edge, threatening the wildness on the fence's other side.  And North Korean deforestation has caused severe flooding in the zone's northern part.  Besides, given the recent increase in rancor between the two Koreas, it seems unlikely that they will join together to petition the United Nations for  World Heritage status for their shared natural treasure.

And while wildlife appears to be flourishing around Chernobyl, scientists are unsure just how the area's high radiation levels are affecting animals.  One scientist reports that a high proportion of birds he and his colleagues have studied suffer from radiation-induced sickness and genetic damage.  Other scientists report that the disaster has not affected either the diversity or the abundance of many rodent species, including shrews, weasels, and mice.  In any event, scientists agree that more study is needed to understand better how radiation in the environment is affecting wildlife.

WHEN HUMANS GET OUT OF THE WAY

What I find most fascinating about the flourishing of wildlife in the DMZ and around Chernobyl is the astonishing increase in biodiversity that develops simply because humans get out of the way!  Despite the presence of numerous landmines or high levels of radiation, nature can still thrive, it seems, when we humans quit interfering!  In a way, this is a hopeful message about the resilience of nature, when left alone.  But, in a sense, the message is not especially hopeful, since we humans can't seem to leave nature alone unless we are forced to for our own safety ! -"April Moore 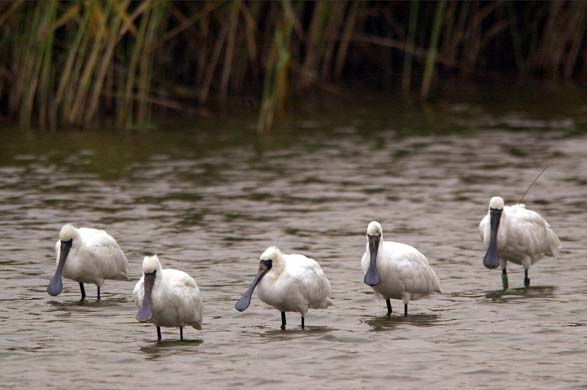 April Moore is the creator and editor of www.TheEarthConnection.org, a site for people who love the earth. The site offers nourishment and inspiration, to strengthen us for the hard work we face in saving our planet. A lifelong (more...)
Related Topic(s): Animals; Birds; Chernobyl; Chernobyl; Chernobyl; Environment-Ecology; Environment-Ecology; Environmentalism; Forests; Other; (more...) Radiation; UNESCO; Wildlife, Add Tags  (less...)
Add to My Group(s)
Go To Commenting
The views expressed herein are the sole responsibility of the author and do not necessarily reflect those of this website or its editors.

Sweet Are the Uses of Adversity

The "Jewel of Siberia"

Grief for Our Planet

The Persistence of Life