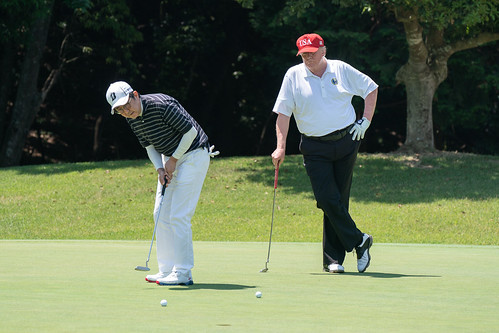 This is the sixth (and last) part in my current "Trump and Fascism: A Retrospective Series," originally published on Buzzflash.com. The first part ran about three weeks ago, the second part about ten days ago, the third part three days ago, the fourth part two days ago, and the fifth part yesterday. As we get deeper into the Impeachment Trial this part is indeed the last of this series. (For the introduction to this archival series see "Donald J. Trump: On the Road from Racism to Fascism, 2011-2020".) And now to today's column, the original version of which was published on June 4, 2019. It comprises a set of predictions made in 2019 and early 2020 of what a second Trump term might have looked like.

In the 2020 elections The Trumpublicans are going to run on what I call "The Six R's and The Two C's": Racism/Xenophobia, Rage, Red-baiting, Religiosity (that is the use of religion for political purposes), Repression (of the vote), Russia (interference, again); and Cheating and Conspiracy theories (to the max).

Depending upon A) who the Democrats nominate for both President and Vice-President, and B) how effective or ineffective his or her campaign is, even with Trump's poll numbers where they are and where they are likely to remain, using these tactics, Trump might indeed win a second term.

As is well-known, over the course of his pre-presidential and presidential career Trump has hit huge speed bumps, bumps that would have derailed any other politician: e.g., both before and after the 2016 election: the "Billy Bush tapes;" the pay-offs to former paramours (with which this darling of the "Religious" Right happened to have adulterous relationships); the results of the Mueller Investigation which showed collusion with the Russians in the 2016 elections (although collusion which, with the available evidence, did not rise to the level of a criminal conspiracy provable in court beyond a reasonable doubt, by Mueller's estimation) and numerous episodes of obstruction of justice, pervasive corruption, self-profiteering, and grifting, to name a few. And then there is the Ukraine scandal, which is still a scandal, despite the O'Connell Whitewash/Cover-up.

In re Ukraine, Trump entrapped himself, in large part by his very own words, by dealing with, or trying to deal with, a foreign power in return for political favors, which is against federal law. Many Trump opponents were saying words to the effect of "we got him." But he had slipped out of the symbolic (civil) cuffs before, and this time with McConnell running the show he slipped them again. Given who Trump is, and the "6 R's/2 C's", even with his approval ratings in the low 40s, given the structure of the Legacy-of-Slavery Electoral College, he might just slip through again into the White House, as he did in 2016. And so, if he does take that oath at 12:01 PM on Jan. 20, 2021, what might be in store for our nation, in some instances right away?

The word "fascism," which I have been associating with Trump for some time now (as have others as well, of course), is appropriate as we conjure up a terrifying second Trump term. In Trump's case, since the system will not mirror exactly the 20th century models of Germany, Italy, Spain, Hungary, and Japan, "21st-Century proto-fascism" is likely a more accurate name for it. But in any case, modern fascism is characterized by the following:

"There is a single, all powerful executive branch of government, in service of a capitalist ruling class that controls for the most part the functions of production, distribution and exchange. There is no separation of powers [one of James Madison's signal contributions to the then-unique form of government established by the Constitution]. Thus, there are no de facto independent judicial or legislative branches, at any level. There is independent media. There is a single national ideology, based on some combination of racism, misogyny, religious bigotry and authoritarianism, homophobia, and xenophobia. There is a state propaganda machine using the big and little lie techniques. There may be a full-blown dictatorship, a charismatic leader, engagement in foreign wars, and the use of the mob/private armies."

And so, in this context, what indeed might a Trump second term look like? Well for one thing, that look would depend in part upon whether in the face of a Trump victory, the Democrats were able to hold onto the House of Representatives. Of course, a Trump win would surely enable the Trumpublicans© to hold onto the Senate. But regardless of that uncertainty, speculation is, of course, necessitated.

Let's begin with the Federal courts. One way or another, the right-wing majority of the Supreme Court will grow to 7-2 (if it doesn't get there already between now and election day). The vast right-wing infestation of the lower federal courts engineered by Tom McGahn, the Federalist Society, and Mitch McConnell has already begun to take hold. It would get only worse from the non-Trump perspective. And rulings against Trump on both personal and governmental issues that were still in effect would be quashed. The Federal courts would begin to positively support a wide variety of Trump initiatives of otherwise questionable Constitutionality. The Federal court system would thus be well on its way to being "fascistified" [sic].

As noted above, another key feature of fascism is the suppression of the free media. It is unlikely that the Trumpublicans© would, at the beginning at least, go after the media directly by statute. (Although who knows. The Trumpites might design a much tighter "national security" limitation on what could and could not be published, which could throttle any criticism/exposure of the Administration on almost any issue.) Further, Trump just loves suing. And he has often talked about suing the media for libel. Right now, it is very difficult for him to do so, most importantly under a famous 1964 Supreme Court decision, New York Times Co. v. Sullivan. It set a very high bar for success in such suits.

Steven Jonas, MD, MPH, MS is a Professor Emeritus of Preventive Medicine at StonyBrookMedicine (NY) and author/co-author/editor/co-editor of over 35 books. In addition to his position on OpEdNews as a "Trusted Author," he is a Senior Editor, (more...)
Related Topic(s): Fascism; Racism; Trump; Trump Against Democracy; Trump Attacks Impeachment; Trump Cruelty; Trump Cult; Trump Dangerous; Trump Evangelicals; Trump Fascist; (more...) Trump Presidency; Trump Racist; Trump Scandal; Trumpism, Add Tags  (less...)
Add to My Group(s)
Go To Commenting
The views expressed herein are the sole responsibility of the author and do not necessarily reflect those of this website or its editors.