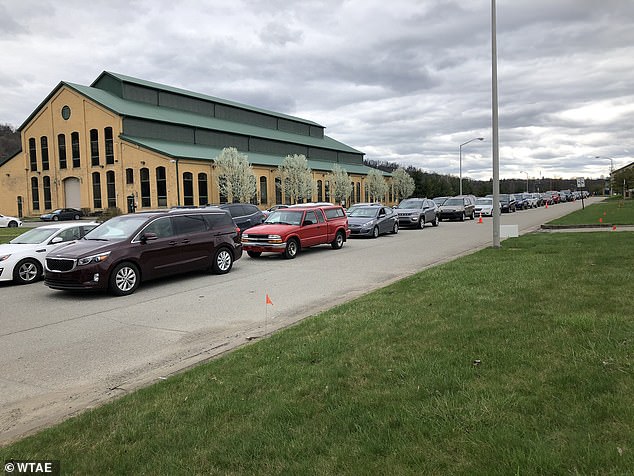 The Greater Pittsburgh Community Food Bank opened its doors yesterday to a mile-long line of cars. Offering fifty pounds of food, no questions asked. Note to self: the asteroid is coming, get to food bank early. If you've never been in a needful situation like this, set your imagination on crazy. The rivers run red with fear. The fear of the unknown and the uncharted, the unhappened the inescapable truth. I love my brother but will kill him for the last can of pork & beans.

One day my grandfather took my father down to the railroad depot to pick up a fifty-pound sack of Mr. Hoover's cracked wheat. The mood was a foul as the line was long. A lot of rachet jawing going on as these men were in dire straits. Fifty pounds of cracked wheat was no picnic, you could bake bread or make cookies, if you had the butter and the sugar. The one thing you couldn't make out of cracked wheat was a meal. Like someone giving you a ride halfway home, thanks for the effort. Anyway, two men were tossing down sacks from the back of a flatbed truck, and they were tired and surrounded by a crowd of angry men. Someone didn't like the way that sack was thrown down and thought it disrespectful. Words were exchanged, and the mob sacked the truck.

Like the ghost to Scrooge, you're going to see a lot of peculiar things around here. I was cleaning up my urban capsule with the news on. "Trump proposes two trillion-dollar infrastructure stimulus." I was stunned as I said to myself haltingly, that's a good idea. That's exactly right! Donald Trump said something that was absolutely unmistakably correct. The broken clock rule proven true, but I knew then for certain that the polarity of the Earth had shifted. I was agreeing with Donald Trump, and that frightened me. Blue cows and green skies, waving mountains and purple wheat majesty coming up!

Then during his daily infomercial, the Cheeto was somber and serious with the pain of a high roller who just crapped out on his face. He appeared almost a sympathetic character, almost what's the word I'm looking for"human? It reminded me of the time I saw Miss America in the Macy's parade. It was a cold windblown day. Wet snow coming down in gobs. Miss America in an evening gown and a cape in no way attired for winter was trying to smile and wave her scepter as the snow stuck to her crown and soaked her hair trying to look happy in a situation which obviously sucked.

I worried for the Cheeto, when the Cheeto tells the truth. I have a sudden impulse to run blindly into the night. To try and run as far away as I can before the bomb goes off. It was almost reassuring when the orange one began to lie and heap cheap praise on himself again.

Related Topic(s): Infrastructure; Stimulus; World Hunger; World Issues; World Leaders, Add Tags
Add to My Group(s)
Go To Commenting
The views expressed herein are the sole responsibility of the author and do not necessarily reflect those of this website or its editors.