By Ray McGovern and Joe Lauria 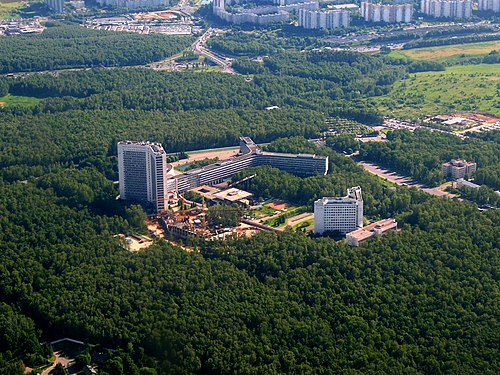 Headquarters of the Russian SVR, which is being blamed for the hack.
(Image by Wikipedia (commons.wikimedia.org), Author: Alex Saveliev from Russia)   Details   Source   DMCA

The hyperbolic, evidence-free media reports on the "fresh outbreak" of the Russian-hacking disease seems an obvious attempt by intelligence to handcuff President-elect Joe Biden into a strong anti-Russian posture as he prepares to enter the White House.

Biden might well need to be inoculated against the Russophobe fever.

There are obvious Biden intentions worrying the intelligence agencies, such as renewing the Iran nuclear deal and restarting talks on strategic arms limitation with Russia. Both carry the inherent "risk" of thawing the new Cold War.

Instead, New Cold Warriors are bent on preventing any such rapprochement with strong support from the intelligence community's mouthpiece media. U.S. hardliners are clearly still on the rise.

Interestingly, this latest hack story came out a day before the Electoral College formally elected Biden, and after the intelligence community, despite numerous previous warnings, said nothing about Russia interfering in the election. One wonders whether that would have been the assessment had Trump won.

Instead Russia decided to hack the U.S. government.

Except there is (typically) no hard evidence pinning it on Moscow.

The official story is Russia hacked into U.S. "government networks, including in the Treasury and Commerce Departments," as David Sanger of The New York Times reported.

But plenty of things are uncertain. First, Sanger wrote last Sunday that "hackers have had free rein for much of the year, though it is not clear how many email and other systems they chose to enter."

The motive of the hack is uncertain, as well what damage may have been done.

"The motive for the attack on the agency and the Treasury Department remains elusive, two people familiar with the matter said," Sanger reported. "One government official said it was too soon to tell how damaging the attacks were and how much material was lost."

Ray McGovern works with Tell the Word, the publishing arm of the ecumenical Church of the Saviour in inner-city Washington. He was an Army infantry/intelligence officer and then a CIA analyst for 27 years, and is now on the Steering Group of Veteran Intelligence Professionals for Sanity (VIPS). His (more...)
Related Topic(s): Cybersecurity; Pandemic; Russian Hacking; Russian Interference; Russian Propaganda, Add Tags
Add to My Group(s)
Go To Commenting
The views expressed herein are the sole responsibility of the author and do not necessarily reflect those of this website or its editors.