Well that all depends upon how the Demcraats would respond.

A couple of weeks ago I received the following communication from the GOP (and that's how they referred to themselves in this particular email):

"Steven, Just wanted to update you on the state of play in the critical battleground races: This weekend, there were a number of positive polls released for Republicans. One forecast showed Republicans holding "at least a nominal lead in eight states held by Democrats, more than the six they need to retake the chamber." One leading forecaster predicted Republicans have a 65.1% chance of winning a Senate majority this November -- up from 63.5% two days prior. And another forecasting model gave Republicans a 61% chance of taking back the Senate -- up from 58% since a wave of new data was released. The momentum is growing, and the odds are on our side. But every single one of these Senate battleground races is just too close for comfort. With less than two months until Election Day, we can't afford to leave the odds making to the pollsters. It's up to us whether we clear the path, seize the lead and deliver a victory in each battleground state."

Then they go on to ask for money. What? They don't get enough from the Koch's et al? But that's another story.

From what I (and you too, I should think) have been reading elsewhere, this prediction, as of now at least, is likely to be fairly accurate. And when the Dems., collectively or individually ask for money, when they are in the "let's scare them" mode in contacting their potential contributors, they cite similar numbers. So the Senate might indeed go Republican, by one of several routes. First, with the Independents Angus King of Maine and Bernie Sanders of Vermont still voting with the Democratic Caucus, the GOP might win 51 or more seats. Second, there might be a tie. Ordinarily in that case the Vice-President would be able to cast the tie-breaking vote, which might very well be the case. But there is a rumour going around Washington that if there were to be a tie, Senator Coal (otherwise known as Joe Manchin) from West Virginia would switch parties (apparently in preparation to run as a Republican for West Virginia governor in 2016). 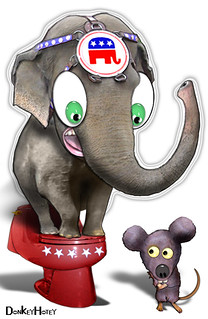 Republican Elephant: watch out below!
(Image by DonkeyHotey)   Details   DMCA

And thus the question is raised, for those who count themselves as liberals, or progressives, or just unmodified Democrats, or folks who really care about the direction that this country has been taking for the past six years, in which for most of the time the Republicans have directly controlled the House and indirectly, through the use of the filibuster, controlled the Senate. Of course, that question is: if the GOP were to take over the Senate, would this be good news or bad news? Well, says the great Seer (as well as Oracles of Delphi), it all depends --- upon two things.

First, would the Republicans end the filibuster? They have used it to a fare-thee-well over most of the past six years (except for that short window when the Democrats had 60 Senate seats and were able to squeeze through the Affordable Care Act). With it, they have pretty well bottled up the Senate, especially since the Senate Majority leader Harry Reid has for the most part let them get away with preventing the Senate from voting on bills reported out by committee simply by saying "filibuster," rather than forcing them to actually do the act.

With the shoe being on the other foot, and the GOP never being worried about inconsistency, hypocrisy or whatever, even though they screamed bloody murder when the Dems. removed the filibuster simply for judicial appointments below the Supreme Court level, they might very well remove it anyway. On the other hand, the GOP might let the present filibuster rule stand, although they almost surely would force the Dems. to really filibuster, not just stop bills from coming to a vote by simply saying "filibuster." Further, there is a long range political reason why they might not touch it. While the Dems. are in danger of losing the Senate this time around, in terms of the seats up for grabs, the elections in 2016 and 2018 actually favor the Dems. Thus the Republicans might want to keep the filibuster in place just as it is, so that, given a Democrat in the White House in 2017, they could continue to control the work of the Senate without holding the majority.

Second, regardless of what a GOP majority would do, or not do, to the filibuster rule, in terms of good news/bad news it depends very much upon just how the Democratic Party, both within the Senate and outside it, would react to GOP control of the Senate. They would, of course, become even more obstructionist to President Obama than they already are. Especially if they canned the filibuster, in cooperation with the House they would pass legislation designed specifically to draw a Presidential veto, starting with repeal of the Affordable Care Act.

They would also pass legislation on: further tax cuts for the wealthy and the large corporations; an increase in military spending (without, of course, raising taxes to cover those costs); possibly even repeal or pass a massive re-structuring of Social Security; Bob Corker's "let's attack Russia" bill currently bottled up in committee; crippling all kinds of environmental, industrial, worksite, and employment regulation, and etc., to say nothing of government shutdown over the debt ceiling, regardless of whether it would be being breached by increases in military spending or not. As for any Obama appointments, fuhgeddaboudit.

Thus with a GOP Senate in place, it would be even more of a testing time for the President and the Democratic Party as a whole (a past test that has been largely failed, of course). They could, as they have done for the most part over the past six years, try to go along to get along, as the President did with the "Sequester," which has drawn down so much Federal government spending in so many areas. Or they might not, or at least that sector of the Party not under the control of Hillary "Wall Street's favorite Democrat" Clinton might not. They might actually run against the Republican Party and its true program, as a whole, using what Republican control of the Congress as a whole actually would, and would not, produce for the nation.

There might be one or more candidates for the 2016 Presidential nomination who would: a) run on a classic pre-Clinton/Democratic Leadership Council/Center-right (really more Right than center) Democratic Platform (and we all know what that means), b) resurrect Howard Dean's "The Democratic Party is in 50 States" strategy, and c) run a Presidential campaign as if it were occurring in a country with Parliamentary form of government, not the un-democratic, minority-dominated (see the US Senate), form that we have. That is it would be campaign focused not just on "vote for me," but rather on "vote for US, and the U.S. and here's why." Now, that would be fun, and original too, wouldn't it?

Steven Jonas, MD, MPH, MS is a Professor Emeritus of Preventive Medicine at StonyBrookMedicine (NY) and author/co-author/editor/co-editor of over 35 books. In addition to his position on OpEdNews as a "Trusted Author," he is a Senior Editor, (more...)
Related Topic(s): Congress; Democrats; Filibuster; Government; Majority; Republican; Senate, Add Tags
Add to My Group(s)
Go To Commenting
The views expressed herein are the sole responsibility of the author and do not necessarily reflect those of this website or its editors.