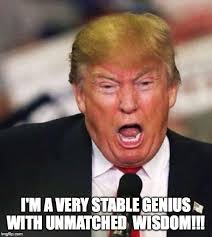 Do you ever wonder how those claiming to be Christian can support rich billionaires like Donald Trump and those with whom he's surrounded himself? How can they vote for those who would deprive them of health care, and give tax breaks to the already super-rich, especially when such policies end up being funded by cut-backs in programs that benefit non-billionaires like themselves -- programs like Medicare, Medicaid and environmental protection?

Today's liturgy of the word suggests an answer. It presents us with what Chilean scripture scholar, Pablo Richard, calls the "Battle of the Gods." The conflict embodies contrasting ideas about the nature of God and God's order as found within the Bible itself - as well as in today's "America."

One concept of God belonged to the rich such as Israel's Kings, David and Solomon - ancient analogues of Donald Trump and his friends. The other belonged to the poor who surrounded Jesus, the prophet from Nazareth. They were working people like you and me, along with n'er-do-wells: the unemployed, poorly paid, sick, disabled, and underemployed. Many were houseless street people and working girls. To them Jesus embodied and spoke of a God unrecognizable to David, Solomon, or today's right wing.

The contrast emerges as today's readings juxtapose the dream of Solomon, the representative par excellence of Israel's 1% in our first reading, over against Jesus' own words about the contrasting nature of God's Kingdom in today's Gospel selection.

Here are my "translations" of this Sunday's selections. Check them out here to see if I've got them right.

I Kings 3:5, 7-12: So, the wily king David's son, Solomon, had a convenient "dream" which proved him every bit as clever as his old man. In it, (as he told his fawning court historian) the new king successfully requested from God not riches or triumph over his enemies but understanding and judgment that would distinguish him as the wisest man ever. (Sounds very like a "stable genius," wouldn't you say?)

Psalms 119: 57, 72-77, 127-130: Would that we could believe such testimony on the part of self-serving politicians like king Solomon. It would mean that they actually preferred God's wisdom to their own - God's law over money. They would be compassionate rather than cruel, value truth over propaganda, and honor wisdom from below rather than the court ideologies of sycophants on the make.

Romans 8: 28-30: How different from the prophet Jesus. As a poor man himself, he was genuinely good, loved God and actually manifested true divine wisdom. We are all called to be like him - not like the always self-congratulatory royals.

Matthew 13: 44-52: However, accepting Jesus' message calls for complete buy-in - for total commitment. It's a pearl of great price. It demands wise discernment in choosing between the good and the bad, the old and the new. Making the wrong choice can be disastrous - though (pace, St. Matthew) never finally so.

Notice in that final reading how Jesus calls his would-be followers to a profound paradigm shift - away from one that lionized the imperial order to a divine kingdom in in which the poor prosper. The former was embodied not only in the Roman empire of Jesus' day, but in Israel itself. Its leaders a thousand years earlier had hijacked the Mosaic Covenant that contradicted their New Imperial World Order.

In today's first reading Solomon's court historians mask the hijacking by predictably identifying their employer as "the wisest man ever," just as before him they had identified Solomon's cruel and womanizing father, David, as "a man after God's own heart." In this royally stolen form, the Covenant connected God and the royal family. It assured a royal dynasty that would last "forever." It guaranteed God's blessings on Solomon's expansionistic policies.

The covenantal truth was much different. In its original Mosaic form (as opposed to the Davidic bastardization), the Covenant joined Yahweh (Israel's only King) and escaped slaves - poor people all - threatened by royalty and their rich cronies.

The Covenant's laws celebrated in today's responsorial psalm protected the poor from those perennial antagonists. For instance, "Thou shalt not steal," was originally addressed to large land-owners intent on appropriating the garden plots belonging to subsistence agriculturalists.

Despite such prohibitions, those who established Israel's basic laws knew the power of money. The rich would inevitably absorb the holdings of the poor as did David and Solomon. So, Israel's pre-monarchical leaders established the world's oldest "confiscatory tax." It was called the "Jubilee Year" which mandated that every 50 years all debts would be forgiven and land would be returned to its original (poor) owners.

Related Topic(s): Bible; Biblical Theology; God; Jesus; Propaganda; Stable Genius; Sunday, Add Tags
Add to My Group(s)
Go To Commenting
The views expressed herein are the sole responsibility of the author and do not necessarily reflect those of this website or its editors.