As is well known, today is the 18th anniversary of the awful tragedy of 9-11, and subsequent events which would not have happened if it had not happened. They will linger with us for decades both in the memories of the lives lost in destruction on the day, and in the shortened lives of First Responders and the demolition crews who were not properly protected at Ground Zero. It will also linger with us in the aftermath of the War on Iraq, which may well have never occurred if not for "9-11." These are matters that I have visited on more than one occasion on OpEdNews and other sites as well. This year, with very slight editing, I am reposting a column that I wrote for the now long-gone poltical website, "The Poltical Junkies." It raises many questions about what really happened and why, many of which have yet to be fully answered.

Despite the swirl of revelations over the past months, the public remains facing a large set of unanswered 9/11 questions, glaring inconsistencies, and seeming lies-at-the-time and very possibly lies now, combined with a drive by the Georgites to withhold as much information as possible (cover-up, anyone?). Only extreme political pressure can force further key disclosures.

The subject of this writing is not a comprehensive review of that data. As a follow-through to the "Condi Rice Testimony" column published on 4/22/04, I will present here just a few prime issues that have raised unanswered questions. The subject of this column is to take a look at possible explanations for the Georgite (my term for the George W. Bush Administration) response concerning events and non-events before, during, and after 9/11. Doing so is in the hope that someday, sooner rather than later of course (and hopefully before the next election), the true story will be revealed. Please note that I wrote this piece on April 19, 2004, so that any information revealed after that date does not play into it. 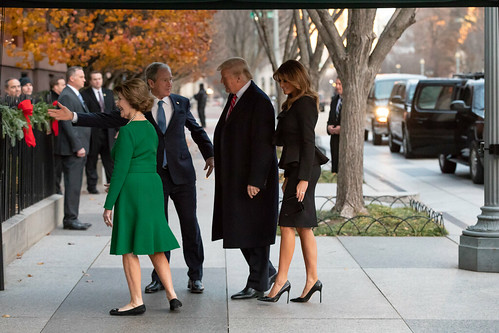 First, let's see a few examples of what we do know about specific information the Georgites had and what they did with it -- and some of the resulting actions they did and did not take. They are presented here not necessarily in either chronological order or in order of importance.

There's the famous August 6, 2001 Presidential Daily Briefing (PDB) that seems to contain some very strong warnings of what eventually happened, well beyond what Rice described as "historical" information (and speaking as a sometime historian, what's wrong with that anyway, if it prompts understanding the present?)

There's the apparent fact that Attorney General John Ashcroft told Thomas Pickard, Acting Director of the FBI in the summer of 2001, not to bother him with talk about terrorism and counter-terrorism, while at the same time Ashcroft stopped flying on commercial flights. There's the famous quote from former national security advisor Richard Clarke about Bush, immediately post-9/11 asking him/telling him to find a connection between bin Laden and Saddam. As Rice and the rest of the White House media operation claimed, when placed in the context of what Bob Woodward, once a Georgite fair-haired boy, is telling us in his new book (Bush at War) about how early, and secretly, Bush started planning the Iraq pre-emptive war, that now doesn't look quite so possibly "made up,".

There's Bush, according to Sidney Blumenthal in The Guardian (UK, April 15, 2004), "Hear no evil, read no evil, speak drivel," not reading anything; whether it's his PDBs or a 17 volume State Department report entitled "The Future of Iraq." It happened to have warned of nearly all the post-Iraq war pitfalls that have been encountered. Bush just listened to what certain of his advisors told him or worse yet, what the real decision-makers, if they are not he, had already decided to do but were kind enough to let him in on.

Just in case any reader doesn't agree with my position that Bush really believes the religious doctrines he says he stands by and for, as quoted by Blumenthal, Bush said, "I also have this belief, strong belief that freedom is not this country's gift to the world. Freedom is the Almighty's gift to every man and woman in the world. And as the greatest power on the face of the earth, we have an obligation to help the spread of freedom." I should note that I am writing this column at a time when Bush is going around the country plumping to make the Patriot Act permanent. Apparently, he believes that he can sell "freedom" abroad, by force, of course, while taking it away right here at home. One must wonder what the Iraqis think about the example of what the "freedom" is that the Georgites are trying to sell to them/force-down-their-throats at the barrel of a gun.

Then there's all the background about the Georgites trying to prevent the formation of the 9/11 Commission in the first place, then under-funding it, then not cooperating with it at all until forced to do so, then cooperating with it as little as possible, and so on. (For example, Bush agreed to be interviewed by the Commission only not under the oath and only in the company of Dick Cheney.) That is combined with the peculiar non-reaction of the U.S. Air Defenses (NORAD) system on 9/11 once it was known, and it was known very early on, that at least one of the planes that eventually crashed into the Twin Towers had been high-jacked that awful morning.

Plus, there's the Great Commander continuing to read to school children after being informed of the first collision of plane with building, and then spending the rest of the day flying around the country on Air Force One. Then there is the mystery of assisting, on 9/12, all those Saudis, including members of bin Laden's family, to fly out of the country during a time when nothing else was flying in U.S. airspace. The litany could go on.

Steven Jonas, MD, MPH, MS is a Professor Emeritus of Preventive Medicine at StonyBrookMedicine (NY) and author/co-author/editor/co-editor of over 35 books. In addition to his position on OpEdNews as a "Trusted Author," he is a Senior Editor, (more...)
Related Topic(s): ASHCROFT; Bush Admin; Bush Iraq Surge; Bush Jesus-in-Chief; Conspiracy; Iraq; Oil; Pentagon; President George Bush; Presidential Authority; (more...) Presidential Daily Briefing PDB; Presidential Powers; Republican; Taliban, Add Tags  (less...)
Add to My Group(s)
Go To Commenting
The views expressed herein are the sole responsibility of the author and do not necessarily reflect those of this website or its editors.