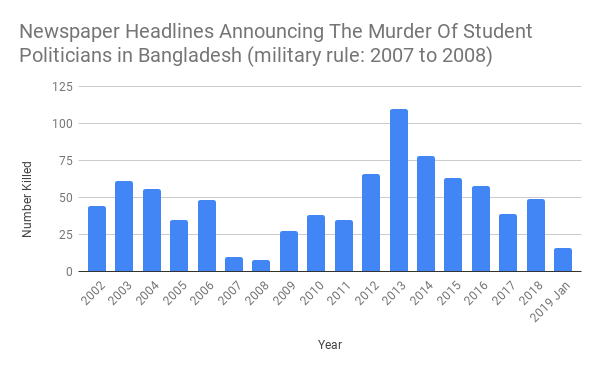 They kill each other over a division of the spoils: note the sharp plunge in killings under military rule (2007-8)
(Image by Iftekhar Sayeed)   Details   DMCA

The city was flooded.

There were sandbags everywhere - even in the hospitals. It was feared that the hospitals would have to shut down, like other parts of Bangkok already had.

My doctor failed to keep his appointment because his house was under water. Another had moved out of her house and onto higher ground - an apartment.

It was widely believed that the government of Yingluck Shinawatra would collapse. It had dismally failed to forewarn citizens of the impending disaster. It was a massive case of government failure.

Iftekhar Sayeed teaches English and economics. He was born and lives in Dhaka, "ŽBangladesh. He has contributed to AXIS OF LOGIC, ENTER TEXT, POSTCOLONIAL "ŽTEXT, LEFT CURVE, MOBIUS, ERBACCE, THE JOURNAL, and other publications. "ŽHe is also a (more...)
Related Topic(s): Army; Bangladesh; Belief; Christianity; Coup; Credo; Democracy; Evidence; Facts; Military; (more...) Political Psychology; Politics; Psychology; Thailand; Thailand; Thugs; Voting; Whitesplaining, Add Tags  (less...)
Add to My Group(s)
Go To Commenting
The views expressed herein are the sole responsibility of the author and do not necessarily reflect those of this website or its editors.