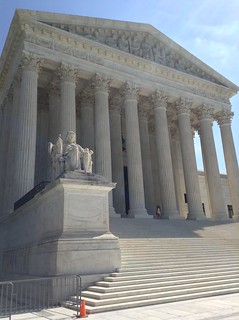 Bad news for voters in the Buckeye State. Good news for partisan Republicans who prefer to win elections by making it more difficult for voters to vote.

In a 5 to 4 decision, the Rightwingers on the U.S. Supreme Court have now overturned the 6th Circuit's earlier ruling that had blocked Ohio Republicans' attempt to limit early voting by shortening the Early Voting period by one week, eliminating the week where voters could both register and vote on the same day, and by doing away with Sunday voting before the election...

"Via SCOTUSBlog comes this Supreme Court order staying the district court's order preventing various cutbacks in early voting (including a cutback from 35 to 28 days, and elimination of one of the two early voting days on a Sunday, a day African-American churches had been using for 'Souls to the Polls' voter drives). [It is not clear from earlier orders which Sunday might be eliminated.]

"Although the order is 'temporary' in the sense that it will be in place pending a ruling on a cert. petition ultimately to be filed by Ohio in the Supreme Court, that won't happen before this election, and so for this election the new shorter voting period is in effect -- and not the old rules put back in place by the district court and affirmed by the 6th Circuit.

"That the Court divided 5-4 along liberal conservative lines is no surprise..."

See Hasen's coverage for his analysis of what happened here, and why he believes it was a mistake to even challenge the OH Republicans' new restrictions on early voting. Please note: We don't necessarily agree or disagree with his analysis, at this time. But you can read it and decide for yourself.

Go to The Brad Blog to read the rest of this article.

Brad Friedman publishes Bradblog.com
Related Topic(s): Ohio Election Corruption; Republican; Supreme Court Hypocrisy; Voting, Add Tags
Add to My Group(s)
Go To Commenting
The views expressed herein are the sole responsibility of the author and do not necessarily reflect those of this website or its editors.