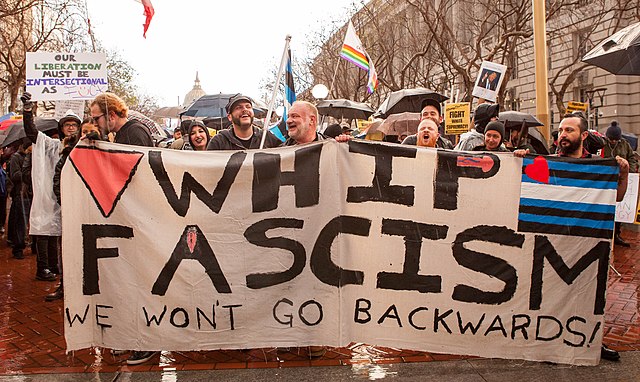 First they came for the immigrants, but I wasn't an immigrant.

Then they came for the Muslims, but I wasn't a Muslim.

Then they labeled the LGBTQs, but I wasn't one of them.

Then they came for the true radicals, but I wasn't one of them either.

Then they came for the "Black Lives Matter" folk and their allies, but I wasn't one of them.

Then they came for the trade unionists who they hadn't bought, but I wasn't one of them.

Then they came for the just plain critics of the regime, and by then it was too late.

(With thanks to Pastor Niemoller.)

So yes, Trump and the Trumpites really are going to engage mass deportation of "illegal" immigrants, just as Trump said they would during the campaign. (Too many people still have not yet taken Trump seriously when he says stuff like this. Fortunately, that number seems to be dropping.) First, the "illegals" are "illegal" only because the law puts them in that category. They could easily be characterized as "undocumented" immigrants, which is precisely what so many of us who are opposed to Trumpite policy (and certainly major elements of Obama policy before him) call it. If these folk are the latter, then the way to deal with the situation is to provide a pathway to legal citizenship. One might make that pathway rather harder than going through the regular immigrant visa policy, but it certainly would be much more both human and productive than what the Trumpites are doing now.

But of course, Trump is first following the long-time Repub. mantra that the undocumented immigrants are by definition "criminals." This is regardless of whether or not they have ever committed a crime -- other than very minor ones -- found in other parts of the local, State and Federal criminal codes. This must be dealt with by A) charging them under criminal law and B) deporting them.

Trump has taken this traditional Repub. line many steps further with his rhetoric about the undocumented immigrants, as he commences mass deportation, whether he and Sean Spicer want to call it that or not. What is so revealing, and has been all along, is that the employers who hire the undocumented are also committing a crime. But one never hears of any such prosecutions, much less any mass criminal-prosecution program, to go after them. Of course, Trump claims that there is wide criminality among the undocumented, a claim for which there is no proof. But of course data means nothing to the Trumpites, it's their claims and the policies that follow them that count.

Now it should be clear at whom the major thrusts of this program will be aimed. It is not, primarily at non-Latino skilled workers or, shall we say, fashion models, who have tourist visas which do not allow them to work anyway, and then overstay them. It is primarily aimed at the Latin American population -- Trump lumps them all together as "Mexicans" -- approximately 11 million of them. And so, where do they work? Well, primarily in unskilled/semiskilled but definitely low-paying occupations, such as corporate farming for crops, meat, and poultry, low-paying manufacturing jobs, and of course the restaurant business.

Indeed, if the Trumpite program is carried through, the latter, up to the highest levels, will likely suffer a severe labor shortage and the farm industry may well too. (I was told just the other day that in the burgeoning Japanese restaurant business, there is an increasing number of Latinos making the sushi, having been trained to do so by Japanese sushi chefs.) Of course, as for the old Right-wing saw that "undocumented workers are taking American jobs," actually, no. It's employers giving those jobs to undocumented workers because they can pay less and provide no benefits.

And so, the question must be asked: Why? Well, an increasing number of observers are characterizing the Trump Regime as either fascist already or definitely on the road to becoming one. I must say that I haven't found a commentator yet who uses the term, who supplies a definition for it, other than saying words to the effect that "this what Hitler and Mussolini did or did not do." I myself described Trump as a fascist, with a definition, in a column that I published last Spring, using a (fairly lengthy) definition of the term. I still like to use definitions, and here's a (somewhat) shorter one, applied specifically to Trump and the Trumpites:

A politico-economic system in which the Racist Reactionary Religious Right controls both the Executive and Legislative Branches of government and the former dominates it; to the extent possible the Judiciary is ignored; the non-Right-wing media are cast as "the enemy"; all political, religious, and ideological opposition to its policies and programs are demonized and then criminalized; the use of the Big Lie technique dominates Executive and Legislative Branch discourse and propaganda; the Doctrine of White Supremacy/racism, xenophobia, Islamophobia, and homophobia, are used to achieve political ends; the free vote is suppressed; all to create and maintain the control of State Power by the economically dominant sectors of the capitalist ruling class.

By the way, "Racist Reactionary Religious Right" is my description for what is commonly referred to as the "alt-Right." I think that the former much more accurately describes the movement, which of course has the closest seat in the White House to Trump himself in the person of Steve Bannon, who has spoken openly of his sympathy for fascist ideology.

Steven Jonas, MD, MPH, MS is a Professor Emeritus of Preventive Medicine at StonyBrookMedicine (NY) and author/co-author/editor/co-editor of over 35 books. In addition to his position on OpEdNews as a "Trusted Author," he is a Senior Editor, (more...)
Related Topic(s): Deportation; Fascism; Immigrants; Muslim, Add Tags
Add to My Group(s)
Go To Commenting
The views expressed herein are the sole responsibility of the author and do not necessarily reflect those of this website or its editors.