This article from Forbes on Thursday provides recent background on Rafsanjani's case.

Rafsanjani, known in many circles as the Godfather, responded in kind with an open letter to the supreme leader demanding punishment for the aggression. That was perhaps the fuel on the fire for the streets. The anti-Ahmadinejad protesters felt more secure and confident after the division among the ruling elite became public and the streets went wild with human chains and slogans demanding Ahmadinejad's resignation.

From a video from a popular independent Iranian website Peykieran.com

Update Note: Payman Jahanbin is the gentleman doing the heavy lifting here. Let me take this opportunity to let you know that he will be publishing a super funny non-fiction book about his life teaching in Salt Lake City, Utah and the politics of Iran. Its called Camel Jockey Go Home. I hope you 'll go there and read a few chapters as we post them.

The title of the video is "Demonstrators Election Announcement."

The guy in the white shirt in the center of the frame at 7 seconds in is 'plain clothes guard.'

We will continue to post video from 'the inside' as they come up.

American news outlets such as NBC are reporting that the police are keeping things under control, but we are hearing and seeing otherwise.

Iranians expect Khamenei will begin rounding up the more visible activist but also current public officials who did not support Ahmadinejad. 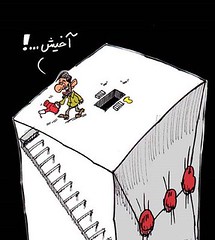 anonymously sourced from either the web or a forwarded email.
Related Topic(s): 2009 Iran Election; Ayatollah Ali Sistani; Iran; Mousavi; People Mahmoud Ahmadinejad, Add Tags
Add to My Group(s)
Go To Commenting
The views expressed herein are the sole responsibility of the author and do not necessarily reflect those of this website or its editors.