"My good friend John Kerry " is under fierce criticism from the U.S. military machine. Despite the fact that, as always, [they] made assurances that the U.S. Commander in Chief, President Barack Obama, supported him in his contacts with Russia ... apparently the military does not really listen to the Commander in Chief."

Lavrov specifically criticized Joint Chiefs of Staff Chairman, Gen. Joseph Dunford for telling Congress that he opposed sharing intelligence with Russia despite the fact, as Lavrov put it, "the agreements concluded on direct orders of Russian President Vladimir Putin and U.S. President Barack Obama [who] stipulated that they would share intelligence." Noting this resistance inside the U.S. military bureaucracy, Lavrov added, "It is difficult to work with such partners."

Putin picked up on the theme of insubordination in an Oct. 27 speech at the Valdai International Discussion Club, in which he openly lamented:

"My personal agreements with the President of the United States have not produced results. ... people in Washington are ready to do everything possible to prevent these agreements from being implemented in practice."

On Syria, Putin decried the lack of a "common front against terrorism after such lengthy negotiations, enormous effort, and difficult compromises."

Lavrov's Foreign Ministry spokeswoman, meanwhile, even expressed sympathy for Kerry's quixotic effort, giving him an "A" for effort, after then-Defense Secretary Ashton Carter dispatched U.S. warplanes to provide an early death to the cease-fire so painstakingly worked out by Kerry and Lavrov for almost a year.

For his part, Kerry expressed regret -- in words reflecting the hapless hubris befitting the chief envoy of the world's "only indispensible" country -- conceding that he had been unable to "align" all the forces in play.

With the ceasefire in tatters, Kerry publicly complained on Sept. 29, 2016: "Syria is as complicated as anything I've ever seen in public life, in the sense that there are probably about six wars or so going on at the same time -- Kurd against Kurd, Kurd against Turkey, Saudi Arabia, Iran, Sunni, Shia, everybody against ISIL, people against Assad, Nusra [Al Qaeda's Syrian affiliate]. This is as mixed-up sectarian and civil war and strategic and proxies, so it's very, very difficult to be able to align forces."

Only in December 2016, in an interview with Matt Viser of the Boston Globe, did Kerry admit that his efforts to deal with the Russians had been thwarted by then-Defense Secretary Ashton Carter -- as well as all those forces he found so difficult to align. 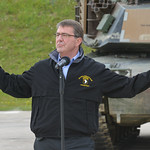 "Unfortunately we had divisions within our own ranks that made the implementation [of the ceasefire agreement] extremely hard to accomplish," Kerry said. "But it ... could have worked. ... The fact is we had an agreement with Russia ... a joint cooperative effort.

"Now we had people in our government who were bitterly opposed to doing that," he said. "I regret that. I think that was a mistake. I think you'd have a different situation there conceivably now if we'd been able to do that."

The Globe's Viser described Kerry as frustrated. Indeed, it was a tough way for Kerry to end nearly 34 years in public office.

After Friday's discussions with President Trump, Kremlin eyes will be focused on Secretary of State Tillerson, watching to see if he has better luck than Kerry did in getting Ashton Carter's successor, James "Mad Dog" Mattis and CIA's latest captive-director Pompeo into line behind what President Trump wants to do.

As the new U.S.-Russia agreed-upon ceasefire goes into effect on Sunday, Putin will be eager to see if this time Trump, unlike Obama, can make a ceasefire in Syria stick; or whether, like Obama, Trump will be unable to prevent it from being sabotaged by Washington's deep-state actors.

The proof will be in the pudding and, clearly, much depends on what happens in the next few weeks. At this point, it will take a leap of faith on Putin's part to have much confidence that the ceasefire will hold.

Ray McGovern works with Tell the Word, the publishing arm of the ecumenical Church of the Saviour in inner-city Washington. He was an Army infantry/intelligence officer and then a CIA analyst for 27 years, and is now on the Steering Group of Veteran Intelligence Professionals for Sanity (VIPS). His (more...)
Related Topic(s): Assad; Ceasefire; Neoconservatives; Putin; Syrian Situation, Add Tags
Add to My Group(s)
Go To Commenting
The views expressed herein are the sole responsibility of the author and do not necessarily reflect those of this website or its editors.