In his appeal for cooperation with the U.S., Putin had written these words reportedly by himself:

"My working and personal relationship with President Obama is marked by growing trust. I appreciate this. I carefully studied his address to the nation on Tuesday. And I would rather disagree with a case he made on American exceptionalism, stating that the United States' policy is 'what makes America different. It's what makes us exceptional.' It is extremely dangerous to encourage people to see themselves as exceptional, whatever the motivation. There are big countries and small countries, rich and poor, those with long democratic traditions and those still finding their way to democracy. Their policies differ, too. We are all different, but when we ask for the Lord's blessings, we must not forget that God created us equal."

In recent days, President Donald Trump's national security adviser, John Bolton, has left no doubt that he is the mascot of American exceptionalism. Its corollary is Washington's "right" to send its forces, uninvited, into countries like Syria.

As was the case in September 2013, Syrian government forces, with Russian support, have the rebels on the defensive, this time in Idlib province where most of the remaining jihadists have been driven. On Sunday began what could be the final showdown of the five-year war. Bolton's warning of a chemical attack by Assad makes little sense as Damascus is clearly winning and the last thing Assad would do is invite U.S. retaliation. 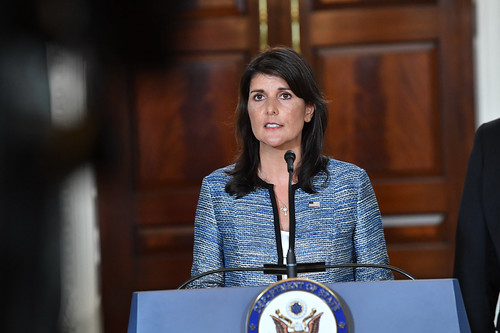 U.S. Ambassador to the UN, Nikki Haley, with remarkable prescience, has already blamed Damascus for whatever chemical attack might take place. The warnings of direct U.S. military involvement, greater than Trump's two previous pin-prick attacks, is an invitation for the cornered jihadists to launch another false-flag attack to exactly bring that about.

Sadly, not only has the growing trust recorded by Putin five years ago evaporated, but the likelihood of a U.S.-Russian military clash in the region is as perilously high as ever.

Seven days before Putin's piece appeared, citizen Donald Trump had tweeted: "Many Syrian 'rebels' are radical Jihadis. Not our friends & supporting them doesn't serve our national interest. Stay out of Syria!"

RT @realDonaldTrump: Many Syrian ‘rebels’ are radical Jihadis. Not our friends & supporting them doesn't serve our national interest. Stay… at

In September 2015 Trump accused his Republican primary opponents of wanting to "start World War III over Syria. Give me a break. You know, Russia wants to get ISIS, right? We want to get ISIS. Russia is in Syria -- maybe we should let them do it? Let them do it."

Last week Trump warned Russian and Syria not to attack Idlib. Trump faces perhaps his biggest test as president: whether he can resist his neocon advisers and not massively attack Syria, as Obama chose not to, or risk the wider war he accused his Republican opponents of fomenting.

Ray McGovern works with Tell the Word, the publishing arm of the ecumenical Church of the Saviour in inner-city Washington. He was an Army infantry/intelligence officer and then a CIA analyst for 27 years, and is now on the Steering Group of Veteran Intelligence Professionals for Sanity (VIPS). His (more...)
Related Topic(s): Russia; Syria, Add Tags
Add to My Group(s)
Go To Commenting
The views expressed herein are the sole responsibility of the author and do not necessarily reflect those of this website or its editors.