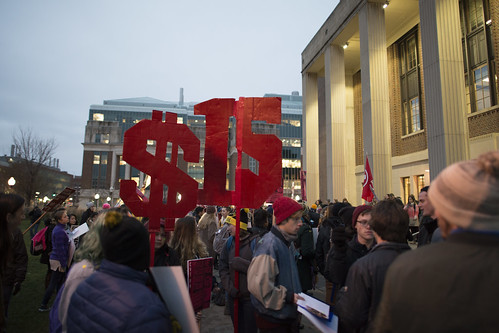 The politics of passing a $15 minimum-wage bill in the Senate are daunting and depressing. The House has already passed legislation that brings the federal minimum wage to $15 in 2025. But the minimum-wage section was removed from the COVID relief package in the Senate, and that means in the future supporters of the $15 minimum will need 60 votes to fend off a filibuster. I do not know how they find six Republican votes and hold on to all the Democrats. Several Democrats, including President Biden and Joe Manchin, have suggested a lesser goal: $11, $12, or $13.

Before progressives start giving in, let's remember these points:

1.The $15 minimum has majority support in the U.S. Even voters in Florida passed a phased-in $15 minimum. Democrats should make it clear they will run on the $15 minimum in 2022.

2. The current federal minimum wage of $7.25 is an insult to the working poor. So is the $10 level proposed by two Republicans, Tom Cotton and Mitt Romney. Ten dollars an hour, or just over $20,000 a year for full-time year-round work, is sub-sub poverty. And I think these two right-wingers wanted to keep the tipped wage option, which allowed employers to pay some employees as little as $ 2.16, with tips used to get to $7.25. The House bill phased out this scammy option, and also lower minimums for young people and the disabled.

3. Let's admit that $15 an hour is not all that much. It is poverty-level too, except perhaps for a single individual in a poor area of the country. (That the official poverty line for a family of four is about $25,000 a year is a sick joke.) Later, progressives will have to battle for a new, higher minimum, something like $20.

4. Political forces working for a higher minimum wage have not exactly been greedy or successful in the past. Sometimes, they have been invisible. The federal minimum was last raised in 2009. In the 40 years since January of 1981, the United States raised the federal minimum wage just seven times, and often in small increments of 40 or 50 cents.

5. Most research shows that there is little-to-no job loss from a higher minimum wage. If the minimum goes to $15, we will hear stories about individuals who lose jobs because small employers cannot or will not pay the minimum. But these instances will be rare, especially if overall job growth is strong, and also if people who are getting raises spend money in their communities to support other people's jobs.

Emeritus Professor of History, Labor and Interdisciplinary Studies, California State University, Dominguez Hills; board member of National Jobs for All Network.
Author of American Unemployment: Past, Present, and Future (University of (more...)

Related Topic(s): Democrats; Employees; Jobs; Politics; Poverty; Republican; Senate, Add Tags
Add to My Group(s)
Go To Commenting
The views expressed herein are the sole responsibility of the author and do not necessarily reflect those of this website or its editors.

Poverty Down, Jobs Up, Everyone Earning More: What's Not to Like? A Father and Son Discuss the News

The Holidays: Arguing about Good Jobs with the Family

The Crummy Good Economy and the New Serfdom

The Gig Economy: How Big, How Bad? Part I: The Numbers

Want to Fix Social Security? Push Democratcs to Do the Right Thing and Vote for Democrats