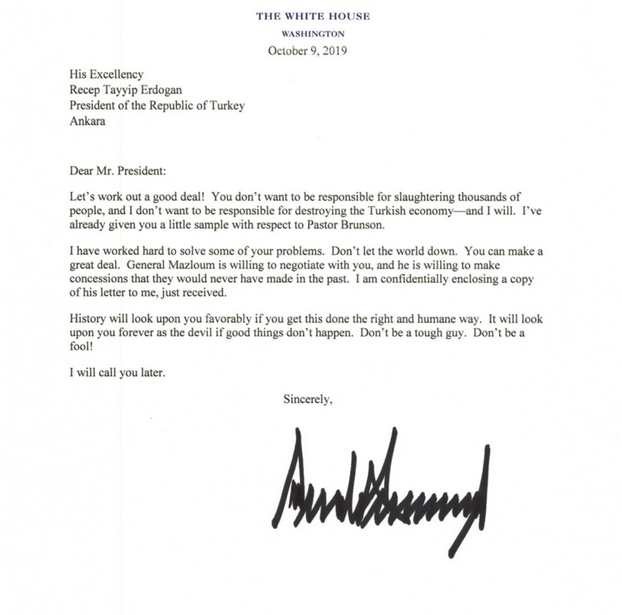 Trump letter to Erdogan
(Image by medium.com/@ericjscholl/what-everybody-seems-to-be-missing-about-trumps-crazy-letter-3fc555920d7e)   Details   DMCA
"The Turkish government launched “Operation Peace Spring”: the strongest and most violent assault yet on Kurdish-held areas of Syria on October 9th. One day after the Trump letter. So this letter didn’t come in response to Turkey going faster and deeper into Syria than the WH expected, laying waste to the Kurd fighters --U.S.’ staunchest allies against ISIS. This letter came before! And Turkey’s President did it anyway. Trump stepped down and let Erdogan dominate. If you factor in the date, that’s what this letter, and its subsequent non-reaction, is all about.Turkey’s had this all planned out for years. It was just a matter of opportunity.  Erdogan’s acting like he could care less about what Trump has to say. The damage Turkey’s done now can’t be undone. (The fact that it was done with Trump’s blessing and then suddenly not, not withstanding)."
Read the rest of the story HERE:

STAY IN THE KNOW
If you've enjoyed this, sign up for our daily or weekly newsletter to get lots of great progressive content.
Series: "FAKE NEWS"

Other Series: View All 105 Articles in "Transformational era of information"