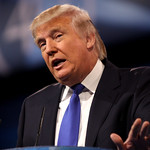 Donald Trump
(Image by Gage Skidmore)   Details   DMCA
GOP senators emerged from the closed-door meeting in visible disbelief that President Trump is refusing to sign a seven-week stopgap measure to fund the government that cleared the chamber by a voice vote less than 24 hours ago. Senate GOP leadership appeared confident on Wednesday that Trump would sign the stopgap, which will fund approximately 25 percent of the government, as long as they kept poison pill policy riders out of it. But Trump, under fire from conservative pundits and lawmakers, reversed course Thursday. House conservatives and Trump appear to be digging in for their demand for $5 billion for the border, a figure Democrats have rejected.
Read the rest of the story HERE: