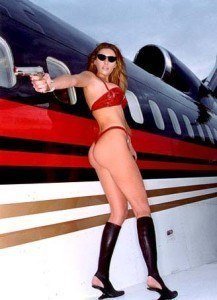 Trump's wife posing with gun...Thong and Boots..And they had a ...
(Image by dailykos.com)   Details   DMCA

'Trump's wife posing with gun...Thong and Boots. Well there you have it… Hypocritical  right wing trashed MIchelle Obama because she bared her arms!  A 'glam' model who grew up when Josip Tito was  the socialist leader  of her nation, and  capitalism did not exist,  Melania Trump  rarely speaks to the media, and  prefers to stay at homeS -- in New York and Palm Beach with their 9-year-old son. Before she met Donald Trump at the Kit Kat Klub in Manhattan and moved into Trump-world, Melania Knauss lived quietly.  She grew up in one of the anonymous concrete apartment buildings of  the Yugoslaviat.'