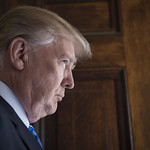 Donald Trump
(Image by Secretary of Defense)   Details   DMCA
President Trump could see up to six Cabinet officials depart in the weeks after next month’s midterm elections, according to interviews with a half-dozen current and former Trump officials and Republicans close to the White House. The list includes Ambassador to the United Nations Nikki Haley, who announced last month that she will depart by the end of the year, with no replacement in line. Trump is widely expected to oust Attorney General Jeff Sessions, whom he has criticized for months. Others who appear most likely to depart, according to administration sources and White House advisers, include Defense Secretary Jim Mattis, Interior Secretary Ryan Zinke, Commerce Secretary Wilbur Ross and Homeland Security Secretary Kirstjen Nielsen, a close ally of chief of staff John Kelly.
Read the rest of the story HERE: