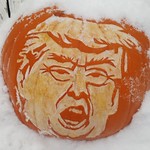 Trump jackass-o'-lantern.
(Image by Rob Swystun)   Details   DMCA
Trump has endured one of the worst weeks of his tenure since Monday’s disastrous press conference with Russian President Vladimir Putin — and he is not out of the woods yet. The initial storm over the news conference was prolonged by a series of missteps and fresh controversies for the administration. Trump’s subsequent invite to Putin to visit Washington in the fall was met with consternation even by many Republicans. Director of National Intelligence Dan Coats was apparently taken by surprise when the news of the invite was given to him at a live event in Aspen by Andrea Mitchell of NBC News.
Read the rest of the story HERE: