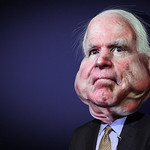 John McCain - Caricature
(Image by DonkeyHotey)   Details   DMCA
President Trump was swiftly rebuked by lawmakers, TV anchors and pundits across the political spectrum Monday after his joint news conference in Finland with Russian President Vladimir Putin. Sen. John McCain, R-Ariz., who has criticized the president's posture toward Russia in the past, called it "one of the most disgraceful performances by an American president in memory. President Trump proved not only unable, but unwilling to stand up to Putin. He and Putin seemed to be speaking from the same script as the president made a conscious choice to defend a tyrant against the fair questions of a free press, and to grant Putin an uncontested platform to spew propaganda and lies to the world," McCain said.
Read the rest of the story HERE: