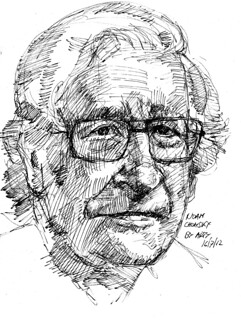 Chomsky argues that responding to extremist terror with a “sledgehammer” may only serve to perpetuate a deadly cycle of violence. In brief, the global war on terror; sledgehammer strategy has spread jihadi terror from a tiny corner of Afghanistan to much of the world, from Africa thru the Levant & South Asia to Southeast Asia. It has also incited attacks in Europe and the US. Terrorism specialists Peter Bergen and Paul Cruickshank estimate that the Iraq War “generated a stunning sevenfold increase in the yearly rate of fatal jihadist attacks, amounting to literally hundreds of additional terrorist attacks and thousands of civilian lives lost; even when terrorism in Iraq and Afghanistan is excluded, fatal attacks in the rest of the world have increased by more than one-third. the 2nd of two parts of  Chomsky's essay that caps his new book, Who Rules the World? Read part one here.

Other Series: View All 290 Articles in "our society changes for the worse"