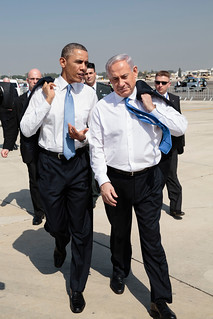 Obama and Netanyahu
(Image by The White House)   Details   DMCA
For over two decades, Israeli Prime Minister Benjamin Netanyahu has been playing us for fools--a role we have filled to the detriment of our national honor and the cause of peace. His entire political career has been focused on demonstrating to Israelis that he could "move [America] very easily"--and, on too many occasions, he has done just that. Since his first election as Prime Minister in 1996, he has been proud of his ability to get away with defying American presidents, while paying no price for his defiance. When he comes to Washington next week, Netanyahu is a man on a mission. His mission? To make it clear to Israelis that he is still the "master" of America. Unfortunately, Democrats and Republicans, alike, will serve as his enablers.
Read the rest of the story HERE: