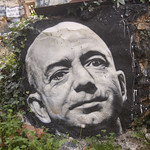 Jeff Bezos painted portrait
(Image by Abode of Chaos)   Details   DMCA
Amazon CEO Jeff Bezos, the world's wealthiest person, said Monday he was committing $10 billion to combat climate change through a global initiative. Bezos announced the initiative, called the Bezos Earth Fund, in a post Monday afternoon on Instagram. The fund will support scientists, activists, nongovernmental organizations and "any effort that offers a real possibility to help preserve and protect the natural world," he said. Bezos said he expected to begin issuing grants this summer. "Climate change is the biggest threat to our planet," he said. "I want to work alongside others both to amplify known ways and to explore new ways of fighting the devastating impact of climate change on this planet we all share."
Read the rest of the story HERE: