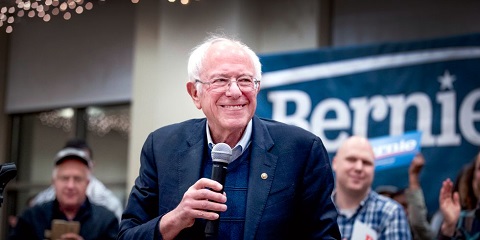 And Bernie what are you doing right? Keep talking revolution
(Image by SvD)   Details   DMCA

Sanders needs to learn from Trump to defeat both Biden and Trump. Biden’s dementia is merely the most tangible reason that Trump would eat him alive. Biden has supported sanctions and wars of aggression at the cost of hundreds of thousands perhaps over a million lives in Iraq alone. A part of Trump’s base that can be won over to Bernie would rather vote Trump than Biden given Biden’s war record by itself.

Sanders has a less than even chance to defeat Trump, but a slimmer chance at winning the Democrat Party nomination. His biggest obstacle is the fact that the party doesn’t want to win, and would rather remain an opposition party.

Kindly Scroll to What Sanders Must Learn from Trump - One: through Nine: Run against the DNC establishment and the Deep State. Does this require explanation?

And Bernie, what are you doing right? Keep talking revolution.