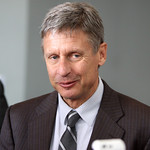 Gary Johnson
(Image by Gage Skidmore)   Details   DMCA
Libertarian presidential candidate and former New Mexico Governor Gary Johnson lived up to his “What is Aleppo?” national security cred when he appeared on CNN’s New Day Monday morning to talk about this weekend’s rash of nonlethal terrorist attacks, and floundered like a discredited Arthur Treacher’s line cook. Even with 24 hours to think about it since his last appearance on CNN, during which he expressed gratitude that “nobody got hurt” in the attacks that actually saw 38 people injured, Johnson was no more prepared to explain what he would do about terrorism if elected president. He said, "It’s really a collaborative effort, and as president of the United States, you know, you’re going to be the arbiter-in-chief over all of this. And it’s why I’m seeking the job."
Read the rest of the story HERE: