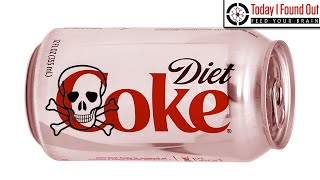 Is Aspartame Bad for You? Subscribe for new videos every day! youtube.com/user/T odayIFoundOut?sub_confirmation =1 ?'How .Dick. came to be short for 'Richard': ...
(Image by YouTube, Channel: Today I Found Out)   Details   DMCA

Sussex University Professor Eric Millstone is calling for the suspension of authorization to sell or use aspartame in the EU pending an independent investigation, arguing that 2-10 per cent of consumers suffer neurological effects, ranging from blurred vision to headaches and, in a small number of worst cases, seizures. 'I have had about 250 people come to me saying they think aspartame caused a problem." Millstone details serious flaws in the way the European Food Safety Authority (EFSA) assessed research on aspartame in 2013 and declared it safe. The academics argue that – since 1974 – scientists have warned of the risks of brain damage, liver and lung cancer, and brain lesions. EFSA discounted the results of 73 studies that indicated aspartame could be harmful, but treated 84 per cent of studies providing no evidence of harm as useful and reliable.