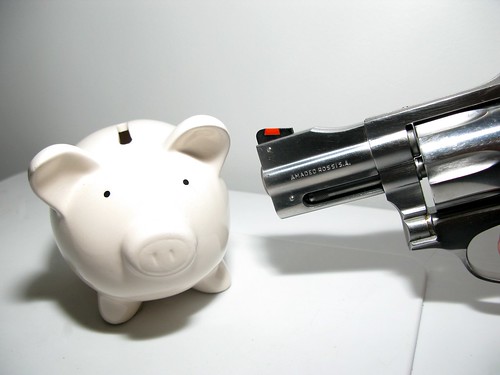 bank robbery
(Image by frankieleon)   Details   DMCA
Education ALERT!  "Arkansas, charter advocates said there would be no action on a bill to turn public facilities over to charters, paid for by local taxpayers, then introduced the bill with no opponents present, and passed it without debate. Word is that the same legislation was introduced in Missour.  This sounds ominously like the work of  ALEC which is a fringe-right organization that writes model legislation and gives it to its members (state legislators), who fill in the name of their state, and lobby for privatization and deregulation. ALEC opposes local control. It supports vouchers, charters, state takeovers of school districts, high-stakes testing, and opposes unions, tenure, and any rights for teachers. No doubt the Walton family helped this legislation along, perhaps with the help of their paid-for academics at the University of Arkansas, endowed by the billionaire Waltons."
Read the rest of the story HERE:

STAY IN THE KNOW
If you've enjoyed this, sign up for our daily or weekly newsletter to get lots of great progressive content.
Series: "WEALTH"

Other Series: View All 513 Articles in "PRIVITIZATION."

Other Series: View All 187 Articles in "legislature and governorsL false info- undoing education"

Other Series: View All 773 Articles in "Charlatans & Liars"

Other Series: View All 939 Articles in "Access: the POWER of MONEY"

Other Series: View All 700 Articles in "wrecking Ball"