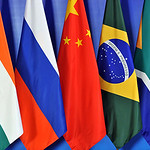 Brazil, Russia, India, China and South Africa have issued a joint BRICS statement condemning military action in Syria that has not been authorized by the United Nations. The statement also calls for respect of international law, territorial integrity and sovereignty.

Some highlights from the statement:

BRICS Special Envoys on Middle East expressed their concern about internal crises that have emerged in a number of states in the region in recent years. They firmly advocated that these crises should be resolved in accordance with the international law and UN Charter, ...