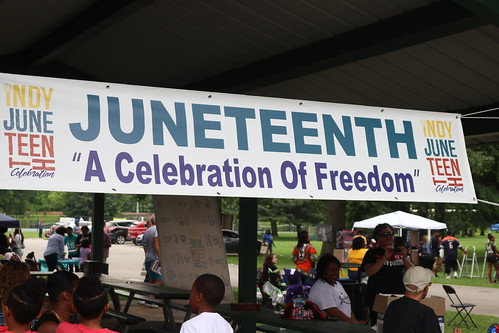 a celebration of freedom
(Image by IndyMayorsOffice)   Details   DMCA

Today for the first time this country, most of it, is celebrating Juneteenth, the anniversary of the day, it is said, when Galveston, Texans found out about the Emancipation Proclamation, the last people in the country to be told. This was on June 19, 1865, two and a half years after the date it was issued, January 1, 1863.

We can stop to celebrate a milestone in history or face the fact of a Constitutional loophole that allowed slavery to continue: the Thirteenth Amendment allows it if a Black is convicted of a crime, an event that was easy to accomplish back then and was, countless times over. A movement is afoot for a very justifiable correction to that hypocrisy, though it is no longer functional in this country per se. But Blacks comprise 33 percent of sentenced imprisoned populations in this county, way beyond their numbers of 12% (as of 2018; now it's 13%) of the population. Whites numbered 30%, Latinos 23% (at 16% of the US adult population as of 2018). That means that more than half of our imprisoned population is non-White. Not a minority, and this same proportion will comprise the majority of the total US population by mid-century.

Obviously this threat to White supremacy has engendered a huge, ugly movement to defy an inevitability. But minorities, Blacks most noticeably, are fighting toward it. I don't envy the generations that will witness the inevitable fallout from what must become a revolution to succeed. Oppositional violence is inevitable. The burgeoning minorities will win, but at what price? This country is merely struggling miserably to live up to its founding principles. Who knew when the crucial documents were drawn up what a struggle would ensue to enshrine them properly in the fabric of a country that will ultimately not be permitted the hypocrisy rampant in the world? That's an awkward way of saying that translating words into reality is the most difficult challenge of them all, the higher their aspirations.

That's a dichotomy we inherited from ancient Greece, a seat of hypocrisy as well as originator of democracy: logos/ergon. Put your deeds where your words are.

But I didn't set out to write about Juneteenth, though I'm celebrating it. The seeds of the White supremacy revolution are ugly. Climate change is worsening and spreading and its facts horrify me as often as I can stomach reading about them. Wars in the Middle East, Taliban taking over in Afghanistan, relations uneasy, at least, with Russia and China and worse with Iran and North Korea. The bomb has us all cowering once again, hearkening back to the 1950s. No air-raid drills this time around. Cyber warfare is threatening all privacy and propriety. No Internet portal is sacrosanct or impenetrable. There's ransomware that has already invaded my savings account as well as others that affect huge swathes of population. Why are we so dependent on computers? Where is this leading us? Billionaires are devouring more and more of the world's wealth with ridiculous and lethal gluttony.

I haven't made a dent in summing up everything that's going wrong. Are violence and bloodshed still most rampant in the DRC? What about the immigrant crises emanating from Syria and Central America/Mexico? What about covid that has paralyzed the world for more than a year? What about pandemics altogether? The world is so vulnerable that I marvel that the sun rises and sets normally for such a large proportion of people. What are the numbers?

Will we survive the massive explosion it will take for our founding documents to translate into reality? Will we survive all these other threats occupying more and more of the world?

And what have I contributed to counteract the melting of Greenland and the two poles that billionaires are hastening to milk of their wealth of saleable resources?

Usually I answer that I write back, but I've been victimized by writer's block for months. I do what I can for election integrity, the original brand of it being so parodied and violated by alt-right efforts to prevent minorities from voting in battleground states. I brood. I read what I can. I index academic books: how can that address the world's sorrows? It's a living for me and admittedly an escape from the above realities as well as personal issues.

Another escape is my new cat, another calico enshrining the memory of Ceridwyn, my previous calico. I wrote a tribute to her in a diary anticipating this new cat in my life it took me a year to find.

I had rescued Ceridwyn from a pet store and rescued Zoe from a non-killing shelter filled with older cats no one is likely to adopt. Some are friendly but many lurk at the back of their cages, having given up on alternatives. This is another world tragedy: the way we treat our animals altogether, all levels of them, and the shelter Zoe came from is most humane and kind to all of its animals. Zoe is a mini-cat, a perpetual kitten at one year old, looking to be about six months. Perhaps she wasn't sufficiently well fed as a kitten or perhaps she's naturally small. It doesn't matter. She's affectionate and loyal; her uncritical love, that greatest gift to us from pets, shelters me at times from the grimness of reality.

So there's my work, film, occasional travel, long walks, love, and a cat to escape into. Can one survive without escaping some of the time? Even Biden and Harris have fun. Even Trump and McConnell. Worlds lean on them and on principles that may kill us or make us stronger. Where will we be at 2150?

It probably won't be pretty but we're all climbing toward it.

Related Topic(s): World Issues; World Wide Web, Add Tags
Add to My Group(s)
Go To Commenting
The views expressed herein are the sole responsibility of the author and do not necessarily reflect those of this website or its editors.