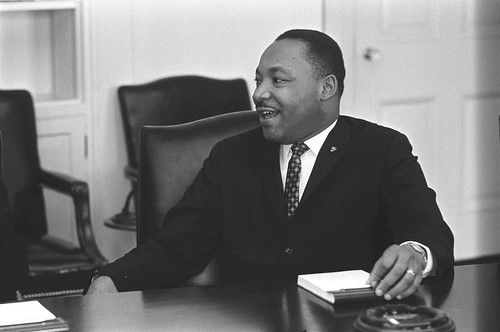 Soon, the United States, and its citizenry, will celebrate the first (and only) national holiday honoring a black man or, in today's parlance "a person of color". At the White House Rose Garden on November 2, 1983, President Ronald Reagan signed a bill creating a federal holiday to honor Dr. Martin Luther King, Jr. It was observed for the first time thirty-four years ago; on January 20, 1986. The holiday unofficially kicks off what is known as "Black History Month" which occurs in February; the shortest month of the year.

Depending on one's perspective, it is a day that celebrates "progress". To others, it is a day of mourning. It is a day which white Americans use to ease their dis-ease with pro forma, perfunctory and obligatory statements and queries such as: "what would Dr. King think today?" Or, my personal favorite, has "the dream been realized?" Those familiar with my opinions know that it matters not to me if "the dream" has been realized, that is an oxymoron; as "dreams", by their very nature, cannot be "realized". The prerequisite to dreaming is being asleep.

The United States is replete with sleepwalkers; both black and white.

I think that Dr. King would be astonished at the optics of the United States, today. I think he would be astonished to see that a brown man, a "Negro", was the President of the United States. In a more generic sense, he would clearly be astonished at the technology that exists today just as my grandparents were when television showed up; or my parents when Sputnik was launched or the first person, albeit allegedly, landed on the moon. Even I am astonished at the technological marvels of my time: from rotary-dial telephones in the 70's to tiny, wireless devices that people carry around in their pockets that they can watch television on, send messages and do all manner of fantastic things. However, when we speak on Dr. King and, by extension, "Civil Rights" the universe is narrowed considerably.

I think Dr. King would be astonished to see that there have been black Senators, Governors, Mayors, and astronauts. Those things, politically speaking, I think he would find astonishing. He would, probably, find it astonishing that there was a national holiday in his honor (though still poorly observed). Though I do not agree with either the tactics or strategy of the so-called "Civil Rights Movement" (particularly Dr. King's), I do have a deep and abiding admiration for his intellect.

So, let's dispense with the optics and discuss the more substantive issues that I believe Dr. King would find astonishing.

I think Dr. King would be astonished at the fact that the United States is involved, and has been involved, in perpetual wars; one of which is in its second decade. You see, one of Dr. King's last speeches was entitled "Beyond Vietnam". In my mind, it was his most significant but white folks didn't like that one. Dr. King would be astonished, given the aforementioned speech, that the United States has not only learned nothing from Vietnam but has, in fact, doubled-down on its global oppression and war mongering to the point that virtually its entire economy is based on same. He would be astonished to see the millions of innocent people killed, many of them children, by the United States resultant of these wars.

Dr. King would be astonished at the number of Black people in America, including children, that continue to be lynched, and summarily executed via extra-judicial processes by State assassins (or quasi-State assassins). He would be astonished that it remains, today, a fact that white American civilians are encouraged by a social and political structure that whistles to them, be it overtly or covertly, that it is okay to oppress and murder Black people in America with relative impunity. They may, in fact, murder a black child and sell the murder weapon at huge profit.

He would be astonished that from the time he walked this earth until now, the social metrics that he was so concerned about (particularly regarding Black people in America) have not significantly changed and are, in many cases, worse. Police abuse and misconduct, inferior schools, under employment, poverty, poor health care and discrimination therein, incarceration, etc. He would be mortified.

Dr. King would be perplexed, at the very least, as to how the United States has sunken to a level of moral depravity that would allow an imbecilic, racist pig to be elected President in the wake of that Negro President of which he was so astonished. He would be very alarmed at the "State of the Union" and would see "difficult days ahead".

Dr. King once said: "Morality cannot be legislated, but behavior can be regulated. Judicial decrees may not change the heart, but they can restrain the heartless".

Dr. King would, were he here today, realize that his dream is not just a dream, but a fantasy.Most poignantly, he would find that America's heart is still...black.

Related Topic(s): Heartless; People; People; Racism; Rights; Speeches; Technology; Wars, Add Tags
Add to My Group(s)
Go To Commenting
The views expressed herein are the sole responsibility of the author and do not necessarily reflect those of this website or its editors.