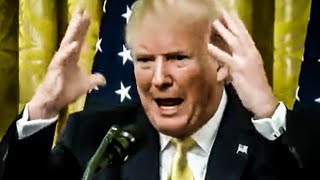 Donald Trump unleashed one of his most disgusting Twitter tirades telling Democratic Congresswomen To Go Back Where They Came From
(Image by YouTube, Channel: The Ring of Fire)   Details   DMCA

The wealthy, white, establishment-Democrat Nancy Pelosi, speaker of the House of Representatives, had no choice but to outwardly defend the House's four leftish first-term women of color against the nation's white nationalist president. Donald Trump had just used his Twitter account to launch a vicious nativist assault on Reps. Alexandria Ocasio-Cortez of New York, Rashida Tlaib of Michigan, Ayanna Pressley of Massachusetts and Ilhan Omar of Minnesota. On the same day his administration had marked for a major round-up of undocumented immigrants, Boss Tweet weighed in on "the Squad's" recent conflict with Pelosi over border security legislation:

"So interesting to see 'Progressive' Democrat Congresswomen, who originally came from countries whose governments are a complete and total catastrophe ... now loudly and viciously telling the people of the United States, the greatest and most powerful Nation on earth, how our government is to be run. Why don't they go back and help fix the totally broken and crime infested places from which they came? Then come back and show us how it is done. These places need your help badly, you can't leave fast enough. I'm sure that Nancy Pelosi would be very happy to quickly work out free travel arrangements!"

This was worse than the usual eye-rolling filth out of the president's Twitter feed. It was the malicious rant of a frothing white nationalist.

As liberals pointed out, with the exception of Omar, all the congresswomen were born and raised in the United States; Omar has lived here since age 10. Trump's wife, Melania, who was born and raised in Slovenia, didn't make it to the U.S. until her 26th year.

But the congresswomen's lands of origin and naturalization were beside the point. For Trump and his supporters, the key facts are that, unlike Melania Trump, they aren't white and are speaking up against racist, sexist and capitalist oppression in the United States. In the white nationalist worldview, the United States is a white country and citizenship here is a racial, not a civil, matter. People of nonwhite identity and ancestry are viewed as inherently broken and inadequate, incapable of civilized self-governance. If they want to be tolerated and taken seriously in "our country," they need to play by rich and powerful white males' rules and know their place. Those who get uppity need to "go back where they came from." It's a very old racist and nativist trope.

Never mind that North America's original inhabitants were brown-skinned people who were almost completely wiped out by European invaders between 1500 and 1900. Or that the genocidal white (un-)settlers -- those Native American writer and activist Ward Churchill understandably labeled simply as "Predator" -- brought black slaves in chains from Africa -- people who never chose to come here in the first place.

American leftists will recognize the notion that people who criticize social and political arrangements and oppressive policies in this country should leave the country, as in "go to Russia," or Cuba, "if you don't like it here." For good measure on that score, Trump's Senate pet and golf buddy Lindsey Graham joined many of his Republican colleagues in defending Trump's racist tweets and then added his neo-John Bircher opinion that Ocasio-Cortez, Tlaib, Pressley and Omar are "a bunch of communists."

Pelosi was right to call Trump's tirade "xenophobic" and, more importantly, to say something many of us have been saying since 2015: Trump's slogan, "make America great again," really means "make America white again."

Of course, nobody who has followed Trump's record over the years should have been surprised at the virulence of his outburst. His history as a vicious racist is well-documented, from his days as a discriminatory landlord through his opening campaign attacks on Mexicans as "rapists," his embrace of the claim that Barack Obama was born outside the U.S., his vile mockery of Asians, his claim that a distinguished U.S.-born judge of Mexican ancestry could not be fair to him because of his ethnicity, his references to Massachusetts Sen. Elizabeth Warren as "Pocohantas," his Muslim immigration ban, his reference to Haiti and some African nations as "shithole countries," his defense of white supremacists in Charlottesville, Va., as "very fine people," and his call for the execution of the falsely accused Central Park Five (whose exoneration he has disputed despite overwhelming evidence of their innocence). John O'Donnell, a former president of Trump Hotel and Casino, recently told The New York Times that Trump "has always been a racist," adding that "anyone around him who denies it is lying." White people, O'Donnell notes. "are Americans to Trump; everyone else is from somewhere else."

At the same time, nobody who has paid attention to Trump's Amerikaner base -- and his takeover of the Republican Party should be surprised that very few Republicans inside and outside of government have responded to his revolting harangue with the disgust it deserves. As Times columnist Charles Blow noted Monday: "We are watching a very dark chapter in this nation's history unfold in real time. We are watching as a president returns naked racism to the White House. And we are watching as fellow citizenspossibly a third of themreveal to us their open animus for [nonwhites] through their continued support of him."

It may have been politically foolish for her to say it during her dismal and disastrous 2016 campaign, but Hillary Clinton was not wrong to call that third of the U.S. citizenry "deplorable." Trump's heartland base is a proto-fascistic cohort that poses grave threats to what's left of democracy and decency in the U.S. today.

That said, what about the Democrats, the party Blow and his fellow Times and MSNBC liberals would have us support in 2020? It is worth recalling that many of the brown-skinned migrants and asylum-seekers currently penned up in Trump's deadly concentration camps hail from Honduras, a Central American nation whose misery was deepened when the "liberal" Democratic president Barack Obama and Clinton, his secretary of state, aided and abetted a right-wing coup that removed Manuel Zelaya, the nation's democratically elected, left-populist president, from power 10 years ago.

It is good that Pelosi and others atop her party had the elementary decency to uphold American civic nationalism in calling out the president and his party as racists. It's good that Pelosi agreed to lead an unusual House vote -- condemning Trump for his racist comments. Still, the cold fact remains that Pelosi recently told the four assertive and proudly progressive first-term congresswomen of color to, essentially, keep their social media mouths shut -- after they had the greater decency to publicly oppose other House Democrats' depressing, Pelosi-led vote to give Trump $450 billion for "border security," even though the bill granting the White House the money contained no serious protections or high standards of care for detained migrants, including children in for-profit concentration camps -- and despite the absence of any real way of stopping the Trump administration from diverting money marked for humanitarian aid to immigration enforcement.

The eloquent Omar found herself in Pelosi's sights (not for the first time) after going on MSNBC, the Democrats' cable news network, to tell some harsh truths about Pelosi's deeply conservative party after the terrible vote:

Paul Street (www.paulstreet.org and paulstreet99@yahoo.com) is the author of Empire and Inequality: America and the World Since 9/11 (2004), Racial Oppression in the Global Metropolis (2007), Barack Obama and the Future of American Politics (more...)
Related Topic(s): American Capitalism; American Facism; American Hegenomy; American Muslim Voice; Democratic; Immigration; Racism; Trump Against Democracy; Trump Anger; White Male Effect; (more...) White Nationalist, Add Tags  (less...)
Add to My Group(s)
Go To Commenting
The views expressed herein are the sole responsibility of the author and do not necessarily reflect those of this website or its editors.