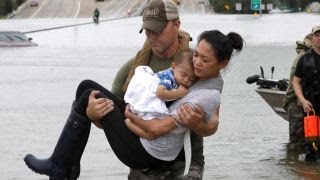 Editor's note: This essay was written before Hurricane Irma emerged in the Caribbean. Irma is another historic superstorm whose fury is significantly fueled by climate change.

I naturally disapprove strongly of the virulent white racists who gathered to violently defend Confederate "slave power" statues in Charlottesville, Va., two weekends ago, but I'll say one thing for them: At least they seem to care quite a great deal in urgent, if vile, ways about politics and current events.

The older I get, the more I am struck by the bloodless social and political indifference and lethargy of millions upon millions of my fellow United States-of-Americans.

Tyranny feeds on mass apathy and docility as much as it does on the marshaling of dark and reactionary forces. As Martin Luther King Jr. wrote: "History will have to record that the greatest tragedy of this period of social transition was not the strident clamor of the bad people, but the appalling silence of the good people. ... In end, we will remember not the words of our enemies, but the silence of our friends."

"He who passively accepts evil," King added, "is as much involved in it as he who helps to perpetrate it. He who accepts evil without protesting against it is really cooperating with it."

Look at the rolling national atrocity that is the quasi- and perhaps pre-fascist Donald Trump presidency. Every week, it seems, the orange-tinted beast comes forward with new threats and offenses to basic civilizational decency. Look at recent events: the crazy game of thermonuclear chicken Trump continues to play with Kim Jong Un; the dog-whistling cover Trump gave to the Nazis and other white supremacists in Charlottesville; the president's threat to "shut down the federal government" if Congress doesn't pay for his criminally idiotic and racist border wall; his granting of an early, pre-sentencing pardon to diabolical Joe Arpaio, the former longtime murderous and racist-fascist sheriff of Arizona's Maricopa County.

Behind the scenes of "This Week in Trump" (TWIT), the "Insane Clown President" has been effectively advancing a hard-right agenda directly through the nation's executive branch. The federal bench is being remade in the image of the radically reactionary and arch-regressive Federalist Society. Financial regulations are being rolled back along with environmental, consumer and civil rights protections. Trump is doing everything he can to slash health coverage for poor people short of his failed efforts to repeal Obamacare -- this while he angles to pass a plutocratic tax cut for the rich in a nation where the top tenth of the upper 1 percent already has as much wealth as the bottom 90 percent.

The worst and least discussed part of the Trump outrage may be the White House's climate change-denialist commitment to the deregulation of energy and the dismantling of environmental protections. Humanity stands on the precipice of full-on environmental collapse, with anthropogenic (really capitalogenic) global warming (A/CGW) leading the grave threat to livable ecology. Trump's radically reckless response is to pull the United States out of the moderate Paris Climate Accords, to remove all references to climate change from federal websites, and to head the Environmental Protection Agency with a fellow petro-capitalist climate change-denier who is dedicated to crippling that federal department.

Trump's proposed budget calls for a 16 percent cut to the National Oceanographic and Atmospheric Administration, which monitors all things climate- and weather-related. The White House wants to slash $513 million from that department's satellite program.

Meanwhile, as Houstonians struggle to recover from an epic storm clearly rooted in A/CGW, Trump proposes to lop off $667 million from the Federal Emergency Management Agency (FEMA). His budget slashes disaster preparedness and response programs and FEMA's pre-disaster mitigation program. It would wipe out the agency's entire national flood insurance analysis program.

This is exterminist, ecocidal madness on steroids.

At the same time, Trump calls for $2.6 billion to finish his big, stupid, racist wall. In Phoenix two weeks ago, he threatened to "shut down the federal government" if it fails to fund that great monument to white-nationalist nativism. All this while advancing major tax breaks for the wealthy few and their giant corporations.

Paul Street (www.paulstreet.org and paulstreet99@yahoo.com) is the author of Empire and Inequality: America and the World Since 9/11 (2004), Racial Oppression in the Global Metropolis (2007), Barack Obama and the Future of American Politics (more...)
Related Topic(s): Catastrophe; Climate; Government; Issues; People; Science; Voting, Add Tags
Add to My Group(s)
Go To Commenting
The views expressed herein are the sole responsibility of the author and do not necessarily reflect those of this website or its editors.