This is an update. I published the original version of this column just about five years ago (see the end note). Since that time, of course, a minority of voters, through the Electoral College which exists because of the original sin of this nation, the institution of human slavery, elected a peculiar sort of President. Despite the fact that he is totally irreligious himself, like the leadership of the Republican Party since the time of Reagan he supports the policies of the intended religious authoritarianism of the Religious Right. And so, with the otherwise non-religious died-in-the-wool racists, its members form perhaps his most devoted following.

The religious authoritarianism of the Religious Right not only criminalizes the thought as to, say, when life begins, of all other religious people, but of course it also heavily impacts the thoughts and actions of the secular folk among us as well. I am a Secular Humanist Jew. I have much to fear from the Religious Right in this country, especially as their political power is advanced by the Republican Party and its current domination of all three branches of the Federal government (about to get more firmly entrenched with the likely confirmation of the accused sex abuser and likely perjurer Brett Kavanaugh to the Supreme Court).

As I have said numerous times in these pages, the assault on legal abortion goes well beyond the matter of the woman's right to choose (a right in which I firmly believe). It goes to, as I said above, the criminalization of certain beliefs/values of both religious and non-religious persons who do not happen to accept the Religious Right's religious position (and for them it is clearly a religious matter, based either in a particular Biblical interpretation or a papal doctrine) on when life begins.

And so, it is in this context, just after the celebration of Yom Kippur this year (Sept. 18-19) that I once again share these thoughts with you.

For Secular Humanist Jews Yom Kippur is not a day of atonement, as it is for theist Jews. We may well have done ethically wrong things in the past year, but we do not regard them as "sins." "Sin" is a religious concept requiring the existence of an unknown, unknowable, and unprovable, yet somehow all-powerful, super-natural being which at some level has control over our lives or parts of them. In contrast, for us Yom Kippur, the most important day in the Jewish calendar, is a day of renewal and rededication. We reflect, we restore, we renew -- we look ahead, not behind.

Before getting on to what I resolved to renew my efforts in dealing with at Yom Kippur, 2013, let me say that as a humanist, an atheist, for my whole life, I am used to be looked down upon (or worse) by theists. Imagine my surprise, then, when I read of what the then new Pope, Francis, had to say about atheists, of which I am surely one, in a lengthy response to a journalist's questions:

"You ask me if the God of the Christians forgives those who don't believe and who don't seek the faith. I start by saying -- and this is the fundamental thing -- that God's mercy has no limits if you go to him with a sincere and contrite heart. The issue for those who do not believe in God is to obey their conscience. Sin, even for those who have no faith, exists when people disobey their conscience [emphasis added]." 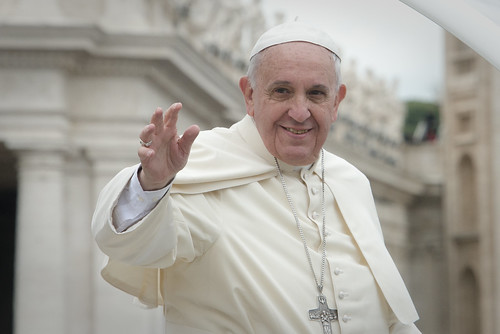 Even in a column like this one, I have to say "Wow, that is quite a statement," especially coming from a Pope. (One can hardly imagine it coming from any of the lay or clerical leaders of the Republican Religious Right in the United States. Indeed, Francis is a very special Pope.) It did make me return to consider a line of reasoning about religious persons, as contrasted with organized religion, that I have held for quite some time. The Pope made it clear that he does not have a problem with atheists, per se. And so, I would like to make it clear that I do not have a problem with theists, per se. Yes, I do understand and agree with all of the arguments against the existence of an unknown, unknowable and unprovable "God" or "Gods" (think Hinduism, of which there are about 1 billion adherents). But I do think that it is a waste of time to argue against the concept, and worse to make fun of it, that the majority of the world's population, who are theists of one sort or another, hold to.

On Secular Humanism, and Non-Political, and Political Religion

The problem, for atheists/humanists and, at many times in history theists of one sort confronting theists of another sort as well, is Political Religion, like the Catholic Church has been since the time of St. Augustine, if not before, like the Republican/Religious Right (political by definition), like political Islam, like indeed political Orthodox Judaism in modern Israel. Our argument is not, or should not be, with belief and the believers. The struggle of humanists and believers alike who are devoted to the fundamental interests of humanity must be focused not on each other but on our common enemy: those who use religion to advance their own political and economic interests to arrogate to themselves and their patrons resources and the product of economic activity that neither benefit humanity as a whole nor have anything to do with religion. Those resources, as mentioned, are otherwise known variously as "corporatism," the "global economy [privately held]," and capitalism.

Further, humanists and tolerant believers alike must struggle against those believers who would criminalize the thoughts and actions of both religious and non-believers alike over such matters as: when life begins; to whom the civil institution of marriage is to be made available; and which segments of the population may be discriminated against in the public square, by those "religious" who take offense at the others' beliefs and practices. It must be understood by all that over the centuries of human civilization, more of our brethren have been killed in religious wars, or wars waged for "religious" reasons, or in wars in which organized religions have been an ally of one or more of the warring states, than for all of the other causes put together.

In the Second World War, hardly a religious war in the sense that the Crusades or the Catholic/Protestant wars of 16th and 17th century Europe were, nevertheless on the belt buckle of every German Wehrmacht soldier was the slogan (originated by the Prussian Chancellor Otto von Bismarck in the 1880s) "Gott mit Uns" (God [is] with Us). The traditional Japanese religion of ancestor worship, Shinto, was mobilized by the Japanese fascist leadership to help them mobilize the whole population behind the war effort.

The Catholic Church was closely allied with both Benito Mussolini's (Italian) and Francisco Franco's (Spanish) fascist states. Further the Catholic Church in Rome made a pact with the German Nazi government that in return for "leaving the German Catholics alone," the Pope would leave what the Hitlerites were doing, first to the "non-Aryan" German people, and then to the populations of Europe as a whole, alone. In the United States, although one of the most prominent pre-war anti-Semites was a Catholic cleric, Father Charles Coughlin, for the most part it was not like what happened in Europe, especially with the role of the Catholic Church there. But there were the frequent imprecations to God for support in battle and even a popular song that I remember well from my youth during that conflict: "Praise the Lord and Pass the Ammunition."

Religious Authoritarianism and the Republican Party

Presently, The US Republican Party runs in major part on the issues that are central to the Fundamentalist Christians and Jews who are central to the Republican base: homophobia, religious determinism in policy governing the outcome of pregnancy, the introduction of organized religious activity into the public schools, and in general the steady erosion of the Constitutional boundaries separating church and state. In political Islam, "Islamism" is very clear that its goal is to take full political power so that it may rule under the provisions of "Sharia Law." (Funnily enough, many of the provisions of Sharia Law, against which the Islamophobes of the Republican Religious Right just love to rail, are strikingly similar to the law that the latter would like to impose across the United States.)

The central feature of both is that "religious law" (as they interpret it of course) should stand above any civil constitution. Don't believe me? Just ask Rick Santorum, Newt Gingrich, the Dominionists Mike Huckabee and Mike Pence, and Antonin Scalia (if you can reach him beyond the grave), and etc. For many Israelis on the Right, the whole policy that has been followed by their Right-wing governments over the years, the gradual erosion and (the hoped for) eventual expulsion (voluntary or involuntary) of the Arab population in the Occupied Territories is based on the Biblical concept of the "Land of Israel." Through my writing I have been fighting the forces of the Republican Religious Right for some years. The original of my current book The 15% Solution: How the Republican Religious Right took Control of the U.S., 1981-2022: A Futuristic Novel (http://www.puntopress.com/jonas-the-15-solution-hits-main-distribution/) was published in 1996.

A Secular Humanist Jew's Statement of Renewal, on Yom Kippur

And so, what was my renewal the Jewish New Year in 2013, and once again for this year of 2018? To rededicate myself to that struggle, and to, from time-to-time, feature the line of reasoning that I have outlined above. Our struggle is not with religion, per se, nor with its adherents, as individuals. Our struggle is most correctly with Political Religion when it is used to further the interests of Reaction by every government around the world that does use it in one way or another. In our time that means capitalism and all of its present and future negative outcomes for all of mankind, whether theist or humanist. That is our challenge, and for the preservation of our species and indeed many others, that is the challenge we have to meet.

Steven Jonas, MD, MPH, MS is a Professor Emeritus of Preventive Medicine at StonyBrookMedicine (NY) and author/co-author/editor/co-editor of over 35 books. In addition to his position on OpEdNews as a "Trusted Author," he is a Senior Editor, (more...)
Related Topic(s): ATHEIST; Abortion; Atheism; Authoritarianism; Capitalism; God; Mussolini; Religion; Religion And Values; Religion As Govt Policy; (more...) Religion Other; Religion-Politics; Republican; Rights; Secular; Secular Humanism; Sharia; Shinto, Add Tags  (less...)
Add to My Group(s)
Go To Commenting
The views expressed herein are the sole responsibility of the author and do not necessarily reflect those of this website or its editors.