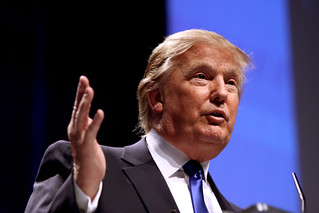 Donald Trump
(Image by Gage Skidmore)   Details   DMCA
Donald Trump, potentially upending four decades of political tradition and backtracking on his own prior promises, said in an interview published Wednesday that he might not release his tax returns before Election Day. The New York billionaire and presumptive GOP nominee said in an interview with the Associated Press that his finances are the subject of an ongoing Internal Revenue Service audit and he won’t release his returns until the inquiry is finished. He said he would not allow his attorneys to release the tax returns even if the audit is not finished by November.
Read the rest of the story HERE: