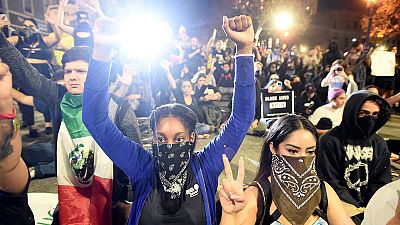 Protesters across the nation hit the streets Wednesday night to protest Donald Trump’s presidential victory. Thousands gathered in New York City, Chicago, Philadelphia, Boston, and Portland, chanting slogans like, “No Trump! No KKK! No racist USA!” In New York, thousands marched to Trump Tower, where demonstrators burned a flag. Police later said at least 15 demonstrators had been arrested. The protest was mostly peaceful, but traffic was crippled and many roads closed. In Chicago, thousands gathered outside the Trump International Hotel. Demonstrators even gathered outside the U.S. embassy in London, holding up placards that read, “No to racism! No to Trump!” In U.S. cities, many protesters said they were anticipating racist policies and a spike in white nationalism after Trump’s shocking win.